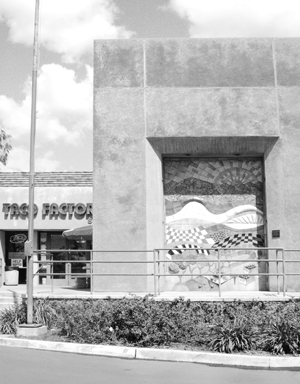 Completed in 1995, Frank Matranga’s “Citrus Traditions” was created as part of a remodeling project and made entirely out of ceramic tile. This artwork is located on the corner of Foothill Boulevard and D Street, between Taco Factory and the Bagelry. Much of the artwork throughout the city of La Verne emphasizes agriculture, particularly orange groves and orchards. / photo by Nancy Dyleuth

Abundant citrus groves; quaint small town charm; a close-knit community – La Verne’s city art exemplifies all of these things and more as a new addition will be added to an entrance point into the city.

A work that is currently in progress for the Puddingstone Drive and Wright Avenue intersection was approved by the Development Review Committee, enabling a 3/4 scale model sculpture of the Wright Brothers’ plane to be established at a key location in La Verne. The Committee believes this developer initiated piece will greatly enhance the city as its location will greet travelers upon entering La Verne.

“The choice of sculpture was inspired by two things, the first being that it is very close to Brackett Airport, and the second is that all of the streets in the area have an aviation theme,” said Hal Frederickson, La Verne community development director. “The new project will help highlight other aspects of the city seeing that many of the existing pieces are tied to La Verne’s citrus heritage.”

Frederickson, development director of seven years, has seen many art pieces approved by the city and says that one of his favorites is “Citrus Traditions,” located at Sal’s Bagelry and Pizzeria on 2095 Foothill Blvd.

This ceramic tile mural illustrates the environmental beauty of La Verne through the depiction of a bright morning sun rising over the mountains, orchards and fruit-filled crates symbolizing the thriving citrus industry by which La Verne is remembered.

“La Verne wasn’t anything but orange groves at one time,” said Sal Perotti, owner of the Bagelry and La Verne resident for 20 years. “It was, and still is, a lovely town with lovely people.”

At first glance, it may be difficult to notice all the beautiful artwork that surrounds La Verne. But just pass by a main street like Foothill Boulevard, and you can’t help but see a piece like “It’s Your Fault.”

This flat, boldly colored sculpture which the artist, Leah Vasquez, says is “an interpretation of the geological cross section of the San Gabriel Mountains exposing its unobservable dynamics within the visible contours of its ridge lines” has graced Gateway Pointe located at 1275 Foothill Blvd. since its completion in 2001. 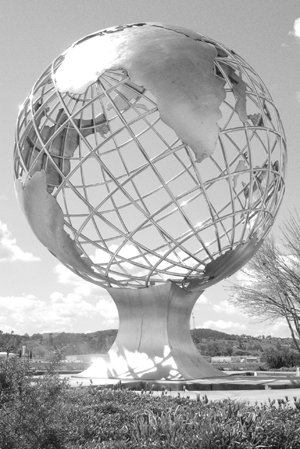 A large world globe, one piece of the city of La Verne’s public art located in the Tofasco business park on the corner of Fairplex and Puddingstone, among the many new pieces made possible in part by the city’s Development Review Committee and the planning committee. / photo by Nancy Dyleuth

The concrete block that it sits upon is part of the piece, which represents the 11-million-year-old rock and sand alluvium that La Verne is built upon.

“I always pass by that art piece on my way to work every morning and I look at it every time thinking how nice it is to have something adding color to an ordinary street,” said Carlos Diaz, a Pomona resident of three years and commuter through La Verne.

Founded in 1887 by Isaac Wilson Lord, the small town of Lordsburg gained most of its residents from the Santa Fe Railroad, which extended its line throughout the area. This historical milestone is captured in the mural located at 2224 Bonita Ave., titled “Transportation Past and Present.” Artists Chris Toovey and Joy McAllister used acrylic paint for the mural, completed in 1997.

One of the oldest pieces of city art includes the “WPA Music Building Mural,” which was completed by Grace Clements in 1939. The integrally colored cast concrete mural is at the site of Damien High School, formerly Bonita Union High School until 1959 when it was sold to the Catholic Archdiocese of Los Angeles. The mural shows an interesting medley of choral singers, instruments and music notes.

“We are proud of the public art in La Verne. Our policy allows us to ensure each piece adds to the quality and aesthetics of life,” Frederickson said.

Megan Montalvo can be reached at mmontalvo2@ulv.edu.

Pageant hopefuls use beauty to make money
When the rain falls, so do driver IQs