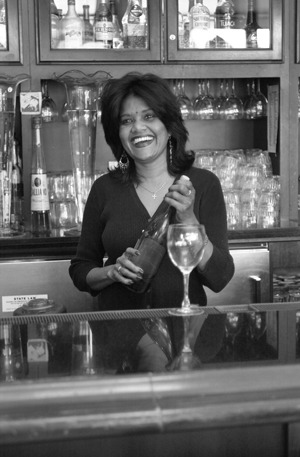 Walter’s Restaurant is located at the corner of Bonita and Yale in the Claremont Village. It serves a variety of American, French, Afghan and Middle Eastern cuisines. Waitress Bina Sharkey, a five-year employee at Walter’s, pours a glass of wine for a customer. / photo by Kelly Rivas

If you are looking for a place to have nice cuisine, to enjoy a stiff drink or just to dance the night away, Walter’s Restaurant in the Claremont Village is the place to go.

As you walk into the restaurant, you immediately enter the bistro. The wood and slate floors, along with the mahogany panels, give the entrance a warm, welcoming feel.

You will also see the first of two full bars, which is laid out with black marble and mahogany wood.
An inviting patio is situated alongside the restaurant, although, it is currently under construction.

However, there is also another outdoor seating area, in addition to three indoor rooms.

“We are trying to target our Friday nights toward college students,” said David Ghafarshad, the general manager and University of La Verne alumnus. “Students need a place to hang out.”

Although Walter’s first opened in 1957, the restaurant was not always geared toward the college crowd.

During its first years, Walter’s was a hamburger and coffee shop.

In 1973, David Ghafarshad’s parents, Nangy and Fahima, bought the location and have transformed it into a fine dinning restaurant.

When the couple first started, they were the restaurant’s only employees.

Now, Walter’s is home to more than 80 employees and can accommodate nearly 500 people.

Walter’s combines a flavorful mix of Californian and French cuisine. The Ghafarshads traveled throughout Europe where they cooked with many different chefs.

The restaurant also serves Afghan and American food. The Ghafarshads have combined these international ideas to bring the unique experience that defines Walter’s.

David Ghafarshad attended ULV for his master’s in business administration after he graduated from Whittier College.

He chose ULV because of the faculty and the alumni who have been going to Walter’s for years.

His wife, Laila Amayreh, attends ULV as part of the CAPA program, where she is currently working on her bachelor’s in psychology. Amayreh helps promote Walter’s to her fellow ULV students.

“It has been slowly building and building,” Amayreh said. “It has also been a lot of word of mouth.”

“We also give student discounts – $2 for drinks with a college I.D.,” Amayreh added.

The couple is pushing for ULV and Claremont students to come to Walter’s, hoping it becomes the new hang out. During this past summer, David Ghafarshad decided college students needed a new place. On Fridays and Saturdays, the bar is open until 1 a.m. and college students also receive a discount on Friday evenings.

“I went when they first started doing the college night,” said Zach Lord, a senior religion major. “It’s cool because there is something for everyone.”

Senior communications major Ken Colby agreed. “It’s a great place for people to hang out and have a good time.”

The restaurant can host several parties in one night, ranging from 20 to 200 people.

Overall, Ghafarshad enjoys running the restaurant as the general manager. His parents will one day pass the family business on to him.

Though he keeps busy, he manages to enjoy the atmosphere.

“I usually give the crew a plan for the night so I can kick back and watch them run the show,” Ghafarshad said. “I like to invite my friends and have a good time too.”