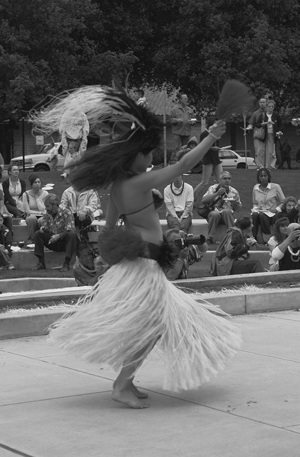 Kanaka Hui Ohana, the University’s Hawaiian club, hosted its annual Luau and Polynesian Hula Show May 5 in Sneaky Park. The event included authentic Hawaiian food and desserts, as well as entertainment from Island Inspirations, a Hawaiian musical group. Cherisse Ligot performed a Tahitian dance while the audience enjoyed the food and the show. / photo by Kelly Rivas

The event began with a dinner or “Aina Ahiahi,” in the native language; with the welcoming aroma of barbeque food that filled the air that consisted of Kalua (roasted pig) and teriyaki chicken. It was served with stir-fried vegetables, white rice, a fruit platter and a pineapple upsidedown cake for dessert.

Island Inspirations provided authentic Hawaiian music during the meal and also for the luau.

“The purpose of the event is to have a great time and it should also be a learning experience,” said Shane Rodrigues, adviser to KHO.

At the start of the luau, a performance of “Tiny Bubbles” was the background music as the dancers taught volunteers on the stage proper Hawaiian dancing movements.

The Island Inspirations dancers entertained with the different types of dances from the various exotic islands.

After the band completed a song, they gave a brief history and origin of the song. The dancers had costume changes to complement the style of song being performed.

When one of the musicians introduced a particular piece of music, a tribal drum beat, two young boys referred to as “little chiefs” took the stage and danced in synchronizing arm gestures.

“For this song we take you to the island, the land of the long white cloud, New Zealand,” said a musician of Island Inspirations while he introduced it.

Each dancer’s movement conveyed a story, whether it was the strong male character portrayed as the chief of the island illustrating warrior facial expressions and arm gestures, the impressive fire knife dancer or the Wahines shaking their hips side to side, each one revealed an authenticity that would be found in the islands.

There was an opportunity for audience participation when the dancers chose members from the audience to join them on stage and try to keep up with the quick hip movements. They would designate a type of fruit such as coconut that indicated they should bump their hips to the right side. Mango was the fruit code word for to indicate that they should push their hips to the back. This dance led them to their final song of the night.

“My favorite part was the ‘mango’ dance audience participation,” said Citlalli Reyes, a senior English major. “I thought it was really funny.”

This event provided the essence of the island and allowed the audience to travel with the band through the authenticity of the sights and sounds.

Kanaka Hui Ohana put together an educational yet exciting event full of authenticity.

“It took about a week to put together,” said Abby Go, a sophomore pre-med major and vice president of Kanaka Hui Ohana. “We had meetings to make sure everything was in order, we wanted it to be what KHO stands for.”

Overall, the night was true to the culture and entertaining for all attendees.

“I thought it was really cultural,” said Kristine Stokes, senior liberal arts major. “This was my first time attending and thought it was well organized. The food was also delicious.”

Kanaka Hui Ohana did in fact stay true to its mission statement.

“KHO promotes the interest of the Asian/Pacific Islander students at ULV,” Rodrigues said.

“It also promotes the identity of the students on campus and through the core curriculum. It also allows the ULV community in the participation of KHO’s education, activities and events,” Rodrigues added.

Jaclyn Gonzales can be reached at jgonzales4@ulv.edu.