By Bailey Porter, John Patrick on September 15, 2006 in News 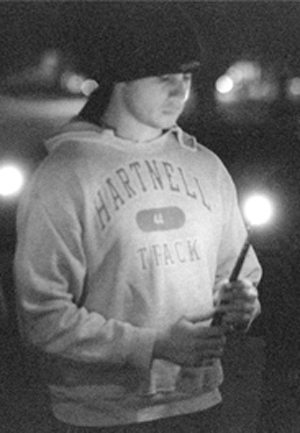 Cpl. Bernard Corpuz attends a 2003 candlelight vigil at the rock in supports of troops deployed in Iraq. He died in action June 11, 2006 while serving in Afghanistan. / file photo by Bailey Porter

Army Cpl. Bernard Corpuz, a University of La Verne alumnus, was killed on June 11 in Ghanzi, Afghanistan by an improvised explosive device during a small arms fight.

Cpl. Corpuz was working with the 303rd Military Intelligence Battalion as a detective and interpreter, when he became the War on Terror’s first casualty to have attended ULV. He was 28.

“I’d have thought he’d have been in a master’s program somewhere,” Professor of Movement and Sport Science Pat Widolff said. “He was really cognizant of world affairs, you could have a conversation with him about anything. The kids on the track team really liked him.”

Cpl. Corpuz, a former ULV track team member, discovered his love of the sport at Palma High School in Salinas, Calif., where he used his participation in the sport to assimilate to his new surroundings after a family move north.

“He was a tremendous student,” Professor of Political Science Richard Gelm said, “the type we all hope to get more of.”

In ULV’s political science department, Corpuz a poly sci major, was known for his drive and inquisitive nature as well as his passion for conservative politics.

Gelm described Cpl. Corpuz as actively involved in campus life and having an imense sense of duty.

“He would have been great for grad school,” Gelm said, “but he wanted to contribute to his country. He made the ultimate sacrifice.”

John Patrick can be reached at jpatrick@spj.org.