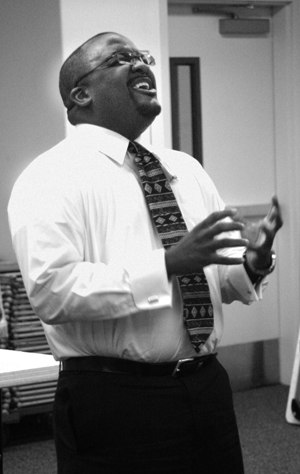 One of two finalists who would represent Club 3957 of the Chino Valley Toastmasters in a Humorous Speech Contest, Eric Coleman practiced his speech entitled “Marine Boot Camp.” The group meets twice a month at the Chino YMCA and aims to help in the personal growth of public speaking. / photo by Rhiannon MIm

Toastmasters are not people who sell toasters. They are individuals striving to perfect their speech and communication skills while building leadership.

The Chino Valley Toastmasters held an open house Sept. 26 for all prospective business owners with an interest in learning to listen, think and speak better.

“I’ve been with Toastmasters for three years and I joined because I needed the public speaking skills,” Sherlyn Negri, a clinical specialist and the Chino Valley Toastmasters’ secretary said. “I persevered to come to Toastmasters so I can speak better to clients and better myself.”

The meeting was held in the Chino Valley YMCA and the room was full of about 20 men and one woman. The people were well dressed and very polite.

The open house was an educational, but entertaining experience. It was hard to believe that this group of people had such a good sense of humor.

“If the camera breaks after you take a shot of me, I’m not liable,” Rodriguez said.

Hot pizza and cold sodas were available throughout the evening.

The word of the day was “perseverance” and the theme was “invest in you, the best is yet to come.” The Toastmasters were challenged to use the word and theme of the day when they introduced themselves.

Ben Gering, an attorney, and Eric Coleman, a stockbroker, competed for the chance to become the Chino Valley Toastmasters representative for the contest.

Gering and Coleman were told that their practiced speeches were to be seven minutes and humorous.

Coleman gave a speech about a funny experience he had at boot camp when he was younger. He worked the stage so well he had sweat dripping down his face.

“I liked the way he took over the floor and ran out of breath,” said Vahan Chaparyan, an engineer and vice president of public relations for the Chino Valley Toastmasters. “It helped imagine what his experience was really like.”

One of the fellow Toastmasters had even gone so far to compare Coleman to Cedric the Entertainer.

Gering gave a funny speech about dating tips for guys trying to date his daughter, but unfortunately he lost because he went 20 seconds over the maximum time of seven minutes.

There were other contests during the evening such as the Evaluation Contest and Table Topics Contest.

Everyone voted on the speeches by using anonymous ballots that were counted up at the end of the evening.

The winners of the speech contests were handed ribbons at the end of the evening.

The contests were speech exercises that helped the toastmasters to strengthen their speaking skills.

Before the end of the evening everyone around the room gave Coleman tips on how he can improve his humorous speech.

Coleman used all the advice that was given to him and ended up winning first place in the “Humorous and Evaluation” contest last Saturday.

Todd Schafer, the president of Chino Valley Toastmasters, was runner-up for the evaluation portion of the contest.

A student from the University of La Verne felt the Open House was entertaining “I think that this is a wonderful organization because it helps a lot of people break out of their shell and it gives them confidence to speak in public without being self-conscious about themselves,” Lizet Ramos, a psychology major at ULV, said.

Everyone is encouraged to join the toastmasters because it is a beneficial learning experience.

Communication skills are needed to succeed in all fields of work.

Toastmasters International is a non-profit organization that was founded in Southern California.

The organization is governed by a Board of Directors elected by the Toastmaster members.

Toastmasters International is split up into 81 districts. Within the districts are areas which make up the clubs.

The Chino Valley Toastmasters meet every second and fourth Tuesday of every month at 7:15 p.m.

For more information about Toastmasters International visit their website at www.toastmasters.org.

News Briefs
School spirit is beyond us