By Jason Jarvis, Kelly Rivas on October 20, 2006 in Football, Sports 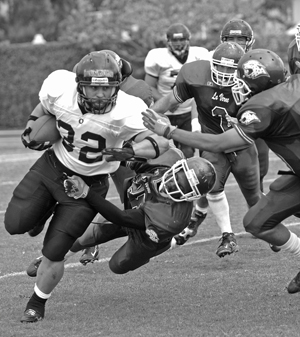 The momentum of last week’s win against Pomona-Pitzer was not enough for the Leopards as defensive back Tarill Sumler narrowly missed a tackle on Occidental’s Bo Renaud during the third quarter against the Tigers at the Homecoming game on Saturday. The Tigers went on to defeat the Leopards, 49-14. / photo by Kelly Rivas

Despite a week in which many students were preoccupied with the question of who would win Homecoming king and queen, there was still a football game to be played.

“Everybody looks forward to Homecoming,” said newly crowned Homecoming queen Gabby De La Cruz. “Students get a chance to see the alumni who come back for the game.”

The University of La Verne hosted the No. 11 ranked team in the country, the Occidental Tigers.

On a dark day with light drizzle, Occidental would rain on the Leopards parade of momentum that was stemming from their great win last week and the amount energy brought out by a week of events throughout campus.

The day looked promising for La Verne, who was looking to improve to 2-1 in the Southern California Intercollegiate Athletic Conference. The Leopards took the lead early in the first quarter when they marched 87-yards on 15-plays to take the lead 7-0.

The drive was capped off when junior running back Chris Handy took an option play 3-yards for the score. As excited as the Leopards were, it would be short lived because that would be the only score the Leopards would get until late in the fourth quarter.

After Occidental was forced to punt on their ensuing possession. La Verne got the ball on its own 12-yard line. After quarterback Troy Doolittle completed a short pass to Michael Moreno, Occidental’s Jeremy Gruber forced a fumble, giving the Tigers the ball on the La Verne 16-yard line. It only took Occidental three plays and 49 seconds to tie the game at 7-7 when Matt Andersen rushed for the three-yard touchdown.

La Verne’s next possession wouldn’t be any better. After starting on their own 29-yard line, the Leopards would suffer from another turnover.

With the ball on the La Verne 32-yard line, the Tigers only needed two minutes and five plays to take the lead.

Tigers quarterback Andy Collins connected with wide receiver Mike Winchell for a 12-yard touchdown to take the 14-7 lead. Collins, the two-time SCIAC offensive player of the year and pre-season All-American, finished the game 21-28 for 242 yards and five touchdowns.

Occidental would eventually go on to take the lead 28-7 at the end of the first half. During the halftime festivities, communications majors Kevin Schatz and De La Cruz were named homecoming king and queen.

Even though the ceremony got the crowd rejuvenated, the Tigers were just too strong for La Verne. Occidental scored again on their first drive of the second half to go up 35-7.

“The turnovers killed us,” said lineman Daniel Castro, “We kept shooting ourselves in the foot.”

La Verne would get their second score of the game with 7:08 left in the game. Doolittle completed a 3-yard pass to wide receiver Adrian Del Haro to cap off a 13-play, 69-yard drive.

Unfortunately it was to little, to late for the Leopards.

Turnovers would be a huge factor in the loss for the Leopards. On the day, La Verne threw five interceptions and also had four fumbles even though Occidental recovered only one. Numbers wise the Leopards matched Occidental, but the score was a different story.

La Verne fished with 352 yards of total offense to Occidental’s 306 yards. Both teams finished with 19 first downs each and the Leopards out rushed the Tigers by 106 yards.

“When you play a team like Occidental you can’t have turnovers,” said head coach Don Morel. “Next week we’re going to have to play as close to a mistake free football game as we can.”

The Leopards fall to 1-4 in the season and 1-2 in SCIAC play while Occidental won their 22nd consecutive regular season game to improve to 5-0 overall and 3-0 in SCIAC.

The Leopards will now travel to Whittier for their next game before returning home to take on Redlands.

Jason Jarvis can be reached at jjarvis2@ulv.edu.