By Katherine Hillier, Kelly Rivas on October 27, 2006 in LV Life 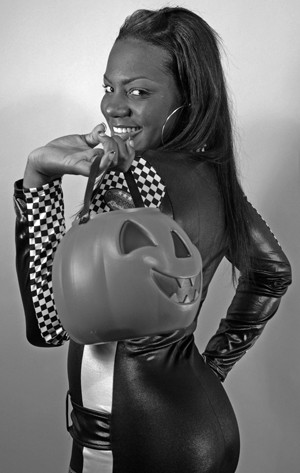 Getting ready for the Brandt Halloween party and a weekend of clubbing, Leoni Gardner went to Romantics on Foothill Boulevard in Upland to get her biker chick costume. Her father’s biking experience and the costume’s sexy appearance prompted her to choose this outfit for this year’s festivities. / photo by Kelly Rivas

It’s that time of the year again when those creative juices start pumping and the search for that ever-so-fabulous Halloween costume begins.

This is the funniest and scariest part of Halloween. On the one hand, that mind-blowing costume may already be hanging in the closet. However for some this is the time when a lack of creativity may seep through and that debut at the yearly costume party may turnout to be nothing more than a slight ache through the door rather than a grand entrance.

But fear no evil because this year – blame it on osmosis – but ideas for choosing a costume with fun and flair are already streaming through the air.

The first thing to do is decide the theme to take on this Halloween. For women, this often involves deciding whether to be scandalous or outrageous. For men, this involves the decision of whether to be funny or frightening.

Theme is important and once it is chosen, half the work is done.

Next the decision is what character or situation to impersonate within the chosen theme.

For those who choose to take on the sexy, but deadly route, there are many stores like Hustler and Frederick’s of Hollywood that have ready-made temptress costumes.

“I think Halloween is a reason to be skanky and not be called a skank,” Natasha Lo, a sophomore international business major, said.

Some of these include the classic ‘50s waitress, the ever so sweet Snow White, the mischievous tinker bell, the naive little Bo Peep and of course the classic devious maid costume. While these costumes look very good – they don’t involve too much creativity, and the likelihood that you may run into another maid or Snow White at the party in the very same costume is at a record high.

“It’s really easy to go buy a costume, but I think the coolest costumes are the ones you make,” Ashley Vaca, a senior international business major, said.

The other option for women is to become outrageous. Fake blood, and white makeup usually will accompany this costume decision.

“Scarier than thou” is the look for the evening and usually that entrance to the party will include screams and squeals of delight from fellow onlookers. Some ideas for this costume/theme choice is the head-spinning “Exorcist” girl, the childish yet terrifying “Bad Seed” girl and the classic serial killer who is on the search for a new victim.

The best way to choose this costume is by finding characters in movies or fairy tales that standout in an unusual way.

“My mom was a pregnant nun one year – that was really funny,” Jacqueline Loya, a sophomore social science major, said.

For men the search for a funny costume nowadays may appear to be endless. Napoleon Dynamite or Pedro, Ali-G, Ron Burgundy or the Burger King guy; these are all classic options for that grand-entrance costume that will have the crowd rolling in the isles.

Choose a character that requires cool accessories – the more accessories the more hilarious and believable the costume. For example, dressing up as Ron Burgundy will require a mustache and a hilarious ‘70s wig, so the weirder the better. Once that mustache is slapped on, the evening is already on a roll.

If this choice in hilarity over horror doesn’t satisfy the fright fest bug, then brains and guts may be the way to go.

Blood-curdling screams are usually what compliment these types of costumes, and rightly so – it is Halloween after all. Horrific costumes are many times the most popular costume ventures on Halloween because they envelope the meaning of Halloween and at the same time allow everyone to let loose and just scream. For this choice some of this year’s favorites include the spine-tingling puppet from the ever-so-scary movie “Saw,” the mutants from the horrific film “The Hills Have Eyes,” the mysterious masked guy from “V for Vendetta” and, of course, Michael Jackson.

So now that the basics are in place, here are a couple of new ideas that seem to be wildly catching on for this year’s Halloween party circuit: the beautiful Marie Antoinette, the quirky Jack Sparrow of “Pirates of the Caribbean,” the femme fatale of “Kill Bill” and the pepper slicing madness of an Iron Chef.

This year try to be original and come-up with a costume idea that hasn’t been done before.

Nix that too-sexy-for-words store-bought costume for one that encompasses the true meaning of Halloween.

Every year Halloween costume searching can be more of a headache rather than an adventure.

But this year take this advice into consideration and make that grand entrance at the yearly costume party; choose that wild and crazy costume; and make it a night to remember.

Katherine Hillier can be reached at khillier@ulv.edu.

On the Calendar
Attraction arrives for fashionistas