By Jason Jarvis, Kelly Rivas on October 13, 2006 in Football, Sports 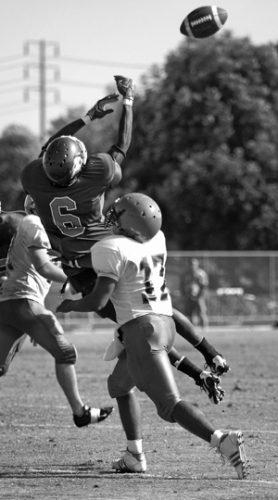 Deep in the fourth quarter on Pomona-Pitzer’s 12-yard line, quarterback Troy Doolittle’s pass was incomplete to the Leopards wide receiver Melvin Ward. There was a penalty flag thrown on the play against the Sagehens’ defensive back Edward Pickett for pass interference, which gave the Leopards a first down on the 10-yard line. The Leopards would finish the drive with a touchdown, giving the University of La Verne a one-point lead over Pomona-Pitzer. La Verne won its first game of the season, beating Pomona-Pitzer, 20-19, Saturday. / photo by Kelly Rivas

The La Verne football team got its first win of the season on Saturday with an exciting 20-19 win over the visiting Sagehens of Pomona-Pitzer.

The win improves the Leopards to 1-3 overall and 1-1 in the Southern California Intercollegiate Athletic Conference.

The Leopards are now only one game behind Occidental and Cal Lutheran, who are sitting at 2-0 in conference play.

“It was huge for us to get our first win,” junior offensive lineman Daniel Castro said. “We definitely have some momentum going into the Homecoming game with Occidental.”

The Leopards would fall behind early when Pomona-Pitzer drove 64-yards for the game’s opening score.

Pomona-Pitzer running back Kevin Yamazaki would cap off the drive with a 5-yard touchdown reception from quarterback Cody Peterson.

Yamazaki would finish the day with three scores and 118-yards rushing on 22 carries.

The Leopards would answer with two scoring drives of their own before the half.

Fullback Joe Camacho got the Leopards on the board when he took the hand off from quarterback Troy Doolittle for the five-yard score.

The touchdown capped a 14-play, 68-yard drive for La Verne.

The Leopards took the lead with 9:15 left in the second quarter when running back Chris Handy had a 4-yard touchdown run of his own.

After the half, Pomona-Pitzer came out running.

Yamazaki rushed for two touchdowns with runs of both 16-yards and 20-yards, respectively.

Pomona-Pitzer went for the two-point conversion after both touchdowns but the Leopard defense held strong, stopping them on both attempts.

With Pomona-Pitzer ahead 19-14 after three quarters of play, the Leopards needed a score so they went to the air.

Doolittle passed for gains of 30-yards and 25-yards to receiver Melvin Ward to help move the Leopards down the field.

After a pass interference call against Pomona-Pitzer, La Verne had the ball on the 10-yard line.

With 9:48 remaining, Doolittle completed a touchdown pass to Ward to take the lead, 20-19.

After a failed attempt at the two-point conversion, it would be up to the Leopards’ defense to keep the Sagehens out of the end zone.

They answered in grand fashion.

Pomona-Pitzer marched up the field 73-yards and was threatening to score.

With under a minute left in the game, La Verne’s Shane Pierce, a defensive back, intercepted a pass attempt from Peterson at the 4-yard line to seal the win for the Leopards.

Doolittle finished the game 28-39 for 302-yards and a touchdown.

It looks as if La Verne will have to continue the season without senior lineman Dennis Parr, who suffered a knee injury early in the first quarter.

“Parr will be a tough guy to replace,” said assistant coach Mike Preston. “He is a great team guy who brings a lot of energy.”

La Verne will host Occidental next Saturday in their Homecoming game that is sure to bring out one of the biggest crowds of the year.

The Leopards have acknowledged that they will have to do a good job of controlling the game to keep the Tigers’ offense on the sidelines.

“We’re really focused,” Castro said. “We know what we have to do.”

The Tigers will be led by two-time SCIAC offensive player of the year, Andy Collins.

Occidental will be a big challenge for the Leopards as the Tigers try to defend their SCIAC title.

Homecoming is the biggest game of the year with festivities leading up to the game happening all week long.

Alumni who are visiting for the big Homecoming weekend can pick up complimentary game tickets at the ULV Fair.

The Fair begins at 10 a.m. on Saturday with registration near Founders Hall and there is a four ticket limit per alumnus, faculty or staff member.

Tickets are worth $6 each but they are free when picked up at the Fair.

With past and present students joining the parents and other Leopard fans in the stands, all showing their support for the team and school, it should be one of the most exciting games yet.

Anxious Homecoming court nominees will also be at the game waiting for the Homecoming king and queen to be announced during half-time.

The big game will be at 1 p.m. tomorrow in Ortmayer Stadium against the Occidental Tigers.

Jason Jarvis can be reached at jjarvis2@ulv.edu.