By Campus Times Editorial Board, Matt Hill on October 6, 2006 in Editorials, Opinions 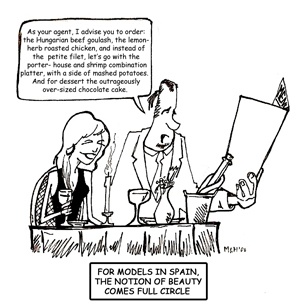 Recently several models were banned from the runway in Madrid for being too thin, leaving many designers outraged while nutritionists rejoiced.

The organizers of the Madrid Fashion Week, the Madrid government, enforced restrictions to promote health and beauty after protests that models were developing eating disorders in pursuit of a super-thin body.

The body mass index that the Madrid government imposed restricts models from the runway with a BMI score lower than 18.

This turned away 30 percent of the models from the event.

This is the first ban of skinny models at a top-scale fashion show, which may lead to bans on other runways.

While directors and designers are outraged at the move and call it discrimination against “gazelle-like” models, Madrid’s regional government said that it is the fashion industry’s responsibility to promote health.

It wants to give a positive image for girls and women to imitate, other than the tall, super skinny and starving look.

Fashion is a mirror and models paint the ideal image for the public. Many girls and women developed eating disorders and unhealthy eating patterns while mimicking their definition of beauty, a rail-thin figure.

Governments around the world seem to back up Spain. Milan’s mayor said she would impose a similar ban if a solution to “sick” looking models was not found.

Madrid’s restriction followed after Luisel Ramos’s death. The 22-year-old model from South America had a heart attack minutes after stepping off the runway.

She should have known that a starvation diet of green leaves and, of all things, diet coke would lead to misfortune.

It shouldn’t take a woman to resemble a skeleton in order to become an international sensation. Leave those for Halloween.

What happened to the fabulous curves of bombshell beauties like Marilyn Monroe or Elizabeth Taylor?

Why has our society taken the spritly Twiggy look to the extreme?

The truth is women don’t naturally look like that.

Ribs are supposed to be hidden behind the skin, not protruding from it like on models such as Kate Moss.

We at the Campus Times believe that displaying sickly skinny models down fashion runways is contributing to anorexia and bulimia among women young and old, and therefore we support the decision that the organizers of the Madrid Fashion week made and we hope it will catch on worldwide.

Following in the steps of Madrid, retailers from England announced their decision to prohibit extremely thin models to participate in “The Clothes Show Live” in December. Organizers in Madrid say the last thing they want to do is promote an unhealthy look. There is a difference between a thin look and an anorexic too-thin, walking skeleton type of look. Sometimes you just feel like running up the runway and stuffing their face with food.

High-end designers need to be more lenient and allow curvy models such as Queen Latifah and Beyoncé to change the standards and showcase the thousand dollar dresses with their curves.

The emphasis should be on the quality and the style of designers’ collections, not the size of a model.

School spirit is beyond us
Fraternities seek out new brothers