By Allison Farole, Maria Villalpando on October 13, 2006 in News 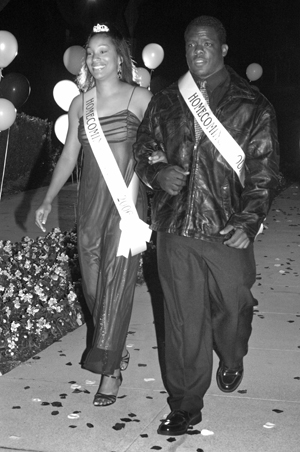 Illumination took place Monday night in front of Founders Hall to announce the 10 Homecoming nominees. Seniors Thomas Allison and Erica Holmes were among the couples chosen based on their involvement in sports and clubs. / photo by Maria Villalpando

On Monday the 10 Homecoming court nominees were announced in a burlesque fashion. All 10 were dressed to impress, as they were announced couple by couple in front of Founders Hall.

“It is definitely an exciting experience. I am proud to represent students that represent the same things I do,” said Allison, Homecoming court nominee and senior football player.

As each person was announced roars of appraisal echoed from both sides of the walkway. Each sorority, fraternity and club came out to represent their members and friends.

“It has been a life-long dream of mine [to be on Homecoming court]. Glad to check one off the list,” said Schatz, Homecoming court nominee and senior radio broadcast major.

Homecoming court is determined by nominations from each club and organization on campus. The nominees are generally outstanding leaders and representatives of the University.

After the nominees are chosen and voting booths are set up around campus to help narrow down the selection to five women and five men.

All nominees must have above average involvement with the campus, show leadership and have a minimum of a 2.5 GPA.

“It is an honor to be chosen to represent Phi Sigma Sigma,” said De La Cruz, Homecoming nominee and senior communications major.

The walkway was lined with white lights and black, gold and white balloons to give a magical presence to the Eiffel Tower replica.

The theme for the first day of Homecoming events was France. To match the theme visitors were greeted with warm hot chocolate to go along with éclairs and chocolate-covered strawberries.

After the treats were served and the names were announced, the front of Founders Hall became a photo frenzy.

Everyone greeted each other with hugs and cheers. The girls were also given flowers as gifts from their sorority sisters and friends.

Allison Farole can be reached at allison.farole@yahoo.com.