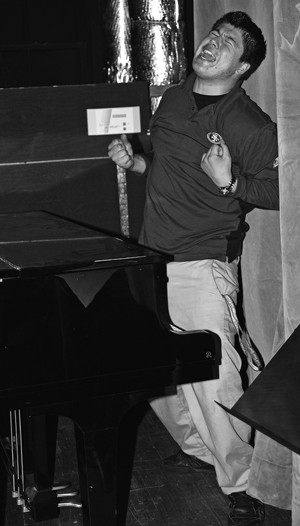 A walk-on from “The Gong Show” audience, Rodger Acevedo, performed Bill Withers’ “Lean on Me.” Five acts signed up to perform in Campus Activity Board’s talent show on Nov. 9 in Founders Auditorium. Despite Acevedo’s efforts, he did not place in the top three. Wilson Hawkins took first place winning Disneyland tickets. / photo by Kelly Rivas

Even though most traditional undergraduate students at the University of La Verne were not born yet, most of us still remember “The Gong Show.”

The Campus Activities Board brought it back, with its own spin.

The classic game show was held Nov. 9 in Founders Auditorium.

Students were given a chance to showcase their talents with the risk of hearing the dreaded gong and getting kicked off stage.

The show was scheduled to start at 8 p.m. but took a backseat to technical difficulties.

The show continued without a stereo system, which may have weakened the performances of the students.

The crowd of about 45 people cheered loudly in the room.

Hawkins, like all the other contestants, was relying on moral support for the show.

Winners of this show were determined by the audience.

The classic NBC game show was played in the unique 1970s style.

Contestants would perform their talents and the judges decided if they stayed on stage.

If the judges did not like the performance they would have hit a gong to end the act immediately.

CAB tried to get an actual gong for the show, but said that its calls were never returned to rent the gong.

Instead, there was a sound effect that made a gong sound; which would have worked had the audience or judges chosen to use it.

The gong was heard mostly in the description of the show before it started.

The show opened with a dance routine performed by Mike Cordova and Jolene Rojas.

The audience cheered as the two danced.

But, the song was nearly silenced by the audience’s cheers.

The lack of stereo equipment made it difficult to hear the music when the audience cheered.

The next duo danced to Justin Timberlake.

Tiffany Segal and Natasha Lo were booed off the stage when their song was thrown off beat.

This was the only time in the show where the gong would have been appropriate.

Despite the slight mishap, the women were welcomed back to the stage for a second performance.

“The second time was a lot better than the first,” Jesse Rodriguez, a senior business major, said.

The next act was Jonathan Smith, who sang “Ain’t No Mountain High Enough.”

They were kept on stage with a lot of cheers, which drowned out the sound from the radio playing their music.

Sara Weythman was next with her own acoustic version of “Part of Your World” from Disney’s “The Little Mermaid.”

Hawkins was the last scheduled performer with “Girlfriend” from Musiq.

His performance too, was drowned out by the cheers.

“There are plenty of loud people here,” said Christa Costello. “But there aren’t really that many people.”

With the lack of performers the judges opened the floor to anyone else who wanted to perform.

Rodger Acevedo was the only brave person to take this chance.

He got up on stage and played Bill Withers’ “Lean on Me” on the piano.

“He is butchering the song,” Costello said jokingly.

The crowd joined in the singing.

After the performances the winner was chosen by cheers from the audience.

After several minutes of people yelling, Hawkins was named the winner and given four tickets to Disneyland.

“It wasn’t that bad,” Hawkins said. “I’m going to Disneyland.”

The show lasted about 45 minutes.

Rick Montañez can be reached at rick.montanez@hotmail.com.