By Morgan Dobis, Sergio Sandoval on December 1, 2006 in Sports, Volleyball 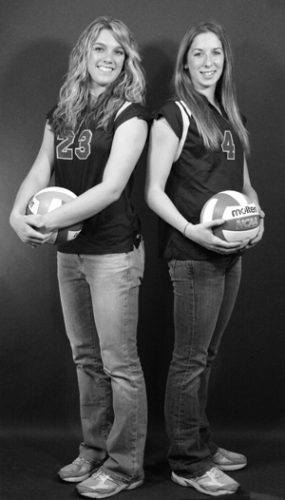 Even though the University of La Verne women’s volleyball team season was cut short this year, there is hope and strength in the returning players.

Junior opposite Jodi Lindsay and freshman middle blocker Crista Jones have both been strong points for the team, earning All-Southern California Intercollegiate Athletic Conference honors and All-West Region honors. These strong returners give a promising outlook for next year’s team.

“We are trying to recruit the senior starting positions we are losing,” Lindsay said. “We are working hard already and just want to beat up on teams next year.”

Lindsay led the Leopards to a record of 27-3 with a seventh consecutive championship in SCIAC.

Now she is being honored for that role, named to the First Team All-American this season by the American Volleyball Coaches Association. She is the 16th different player from the University of La Verne to be named to the All-American team.

Lindsay ended the season leading the Leopards in kills with 313 in 91 games and a hitting percentage at .356 on the year.

“Jodi is a huge asset to our team because you know that you can always give her the ball,” Jones said. “She is so consistent and a really enthusiastic player to play with. I really look up to her.”

“Crista got better all year long,” Flora said. “Going from not starting to starting to becoming one of our main offensive weapons.”

Jones had an outstanding first season being ranked among the team leaders in blocks, kills with 228 in 84 games and a hitting percentage of .337.

“She was a stud,” Lindsay said. “She came in hesitant because she didn’t know us, but she got over it quick.”

Alta Loma is home for the 20-year-old Lindsay, whose first love happens to be softball, not volleyball.

She played softball from the age of 5 and only began to play volleyball the summer going into her freshman year at Upland High School.

Upland High held a summer camp for volleyball players interested in trying out for the team, and Lindsay’s volleyball career was born.

“My dad encouraged me to try it, he told me it was going to be fun,” Lindsay said.

The volleyball team at Upland High proved competitive, and to stay sharp, Lindsay began to play on club teams while continuing to play softball.

Lindsay was selective when choosing her future college. She wanted to stay close to home.

“I also wanted to play both sports and La Verne said that I could do that,” Lindsay said. “Robin [Haaker] and Don both said it wouldn’t be overbearing, and both sports had successful programs so I was excited.”

Lindsay has excelled in both sports at the University.

Besides her achievements in volleyball, Lindsay was named to the first team All-SCIAC for softball in 2006.

Jones ventured to La Verne from Fresno, but not by accident.

She comes from a long line of La Verne alumni.

Her parents and both older sisters attended ULV. Her oldest sister, Adele, is a 2005 alumna of the women’s volleyball team.

Jones has been playing volleyball since elementary school and she said she grew up knowing she wanted to play for La Verne.

“Playing for ULV was a really exciting experience and was really good for me,” Jones said. “All of the players and coaches were so friendly.”

Both Lindsay and Jones will play big roles for the team next year.

“I think the two of them have the ability to be the best players in the country, if they work hard enough,” Flora said.

Jones will continue to train with the team over the off-season perfecting her game.

“She will be a leader, she is quiet and reserved but she leads by example,” Lindsay said.

Lindsay moves on to her next sport at La Verne training over the next two weeks for softball, which will start its season in January.