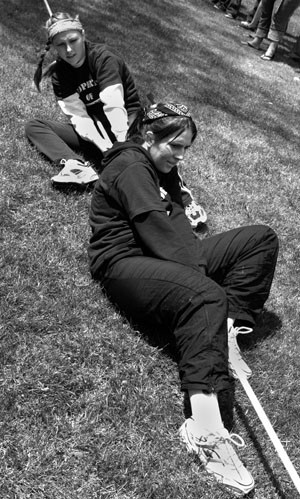 To kick off Greek Week, six sororities and fraternities battled it out at the University Mall in a game of Tug-of-War. Sorority sisters Lauryl Bakke and Aubry McSweeny from Iota Delta held on tight for the win against Phi Sigma Sigma in the first round. By the end of the final round, Sigma Kappa beat Phi Delta Theta to win this event. / photo by Rhiannon Mim

After some intense rounds of tug of war and lots of cheering from the crowd, the first event of Greek Week 2007 ended with Sigma Kappa sorority in the leading position.

Each time the teams were competing in the rounds, cheers from their sorority sisters and fraternity brothers could be heard from the sidelines.

Some teams even made posters which they held up when their team was competing.

During both of those rounds Sigma Kappa emerged victorious and loud cheers were heard after each victory.
Phi Sigma Sigma also competed against Phi Delta Theta.

Phi Delta Theta won that round.

In another round, Phi Delta Theta beat Alpha Omicron Pi.

Director of Student Life, Chip West began each round by giving the teams the okay to begin pulling the rope.

Diana Westmyer and Mike Cordova, who co-chaired Greek Week, acted as referees for this event.

“I think it went very smoothly. I think it was obvious who practiced and put a lot of effort into it,” Westmyer said.

The goal of Greek Week is to promote a unity between the sororities and fraternities at the University of La Verne.

Cordova also said that they wanted to start out with one of the more difficult events first.

Each of the teams competing could have no more than 1000-pounds on either side.

During the competition the contestants were sitting down as they tugged and pulled on the rope.

“I think it went well. It was better than last year and everybody had fun,” James Ridings, a Phi Delta Theta member, said.

Ridings said for many participants, this is their first Greek Week.

“I think we did better than what everyone expected us to do,” Ridings said.

For many of the participants Greek Week is a time to bond.

“It really made me feel united with my sisters,” Tyonna Adams, a Phi Sigma Sigma freshman said.

“I think we will do well, as long as we stay together. That’s what counts,” Adams said.

Greek Week had a positive impact for each organization.

“I think everyone has worked really hard and Greek Week is a showcase of those efforts and it’s wonderful to see all the teamwork,” senior Sigma Kappa member Lauren Moon said.