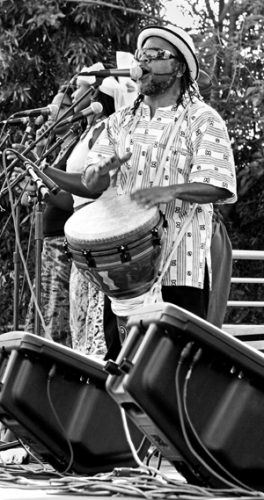 As the final performance, Da Lion and Djimbe West African Drummers and Dancers showcased their mixture of traditional African rhythms with jazz and hip-hop at the 27th annual Claremont Folk Festival. Founder Leon Mobley has performed around the world and is also a percussionist for Ben Harper. / photo by Rhiannon Mim

The annual festival began in 1970 with a few musicians meeting in Memorial Park in Claremont.

One of the founding members of the festival was Dorothy Chase, who helped open the Folk Music Center in 1958.

Since 1970, the festival has evolved from a group of folk music fans into an entire day of music, dancing and education.

Entertainment at the festival came in a variety of styles and sounds.

Throughout the day the patio, mainstage and kid’s stage hosted artists of all backgrounds and genres.

This year’s line up was, as always, a delightful mix of cultures.

Among the musicians were Mariachi Juvenil Los Reyes, John McEuen and a personal favorite, Sligo Rags.

John McEuen, a founding member of the Nitty Gritty Dirt Band, performed later in the afternoon.

His traditional bluegrass, country and folk music got listeners of all generations to bob their heads and think back to the “good ole” country days.

Celtic band Sligo Rags also performed their folk and bluegrass music. Their mix of jazz, bluegrass, country and older Irish tunes got the crowd excited and on its feet.

Crow is known for his children’s musical compositions and numerous appearances on TV.

Lloyd has appeared in other festivals and theatres, sharing her brand of storytelling through music and spoken word.

Besides music, another essential to the Festival was the educational workshops.

Located in classrooms throughout the central courtyard of the school’s campus, the workshops taught children, and curious adults, how to make and play a variety of instruments.

The morning workshop session offered lessons in playing the harp, the dulcimer, the fiddle and the didgeridoo.

Children and adults watched professional musicians play the instruments and then learned about the history behind them, as well as the beautiful music they created.

Leon Mobly, a member of Da Lion, one of the groups that performed during the festival, shared his music and secrets of African drumming with those in the workshop. The last session of the day included lessons on the banjo, the fiddle and the ukulele.

Crooked Jades, also a performing band at the festival, explained to those who attended their workshop the beauty and history of old-time fiddle music.

Throughout the day, echoes of folk and ethnic harmonies could be heard floating from every direction. Old men with banjos, barefoot, singing children and hippies wearing hats were some of the more popular sights.

Many families attended the festival, each child smiling with his or her facepainted, and usually blowing happily into a kazoo.

The east playground of the elementary school was home to vendors selling ethnic food, many kids activities and the Centennial Museum.

Children and adults could enjoy ice cream, Mexican food or other delicious treats, while painting their own didgeridoo, listening to a live performer or participating in any of the other colorful and exciting activities.

The Centennial Museum was located in room 17, directly next to the playground. The room housed pictures, objects and music that celebrated the 100 anniversary of the city of Claremont and its proud history as a patron of folk music. The museum featured musical performances and lessons by ethnomusicologists about the rich traditions of original folk music.

The festival also included arts and crafts vendors, that sold their original and colorful items out in the back of the school, near the mainstage.

Vendors were friendly and talkative, eager to share their handmade, organic, all-natural products.

Walking past the stands and listening to the wonderful soft music coming from the mainstage, visitors enjoyed a sense of community. People dancing, children whizzing by with their dogs, the wild colors worn by the even wilder hippies and the beautiful sunshine created a familiar, comfortable feeling. Everyone has friendly and willing to chit-chat, including two policemen. There are no formalities between visitors. By the laughing, music and warmth shared by all, it seems as if everyone is family.

The Folk Music Festival was intended for that very purpose: to bring people together.

Through the balmy outdoor setting, the lively and entertaining music and the intimate sense of community, the Festival continues to invite visitors and musicians to participate in the education and preservation of a rich and beautiful folk music history.

For information about the Folk Music Center visit www.folkmusiccenter.com.

Lilia Cabello can be reached at lcabello@ulv.edu.