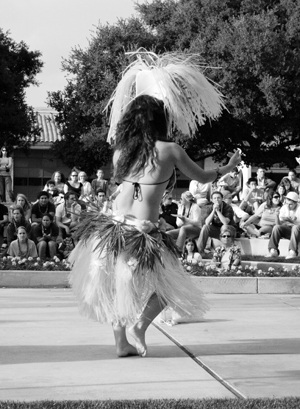 Kanaka Hui Ohana, the Hawaiian cultural club on campus, shared the Polynesian culture with a luau on May 2 in Sneaky Park. University of La Verne students and staff gathered to watch the Island Inspirations Polynesian dancers and learn more about the art, food and celebrations of the islands. / photo by Seanette Garcia

Kanaka Hui Ohana club at the University of La Verne had its annual Luau in Sneaky Park on May 2.

Sneaky Park was filled with about 100 ULV students, faculty and the surrounding community members.

“It’s a tradition that everyone’s gotten use to,” said Tiona Hobson, a junior broadcasting major and vice president of the club. “We do our best every year to try to make it better than the last year. It’s just a fun time.”

Kanaka Hui Ohana is a Hawaiian club that is important to the Asian/Pacific Islander students at ULV.

The club committee and some students were dressed in Hawaiian attire like Hawaiian wraps, flowers in their hair and leis.

All the decorations gave students an island feel.

The luau was decorated with tiki torches, beach balls, mats to sit on and leis – it was a great Hawaiian experience.

The Luau offered a delicious Hawaiian dinner (Aina Ahiahi), which was hosted by Sodexho Campus Dining.

Before students got their meals, their photo was taken and they were given leis, which was a great way to start off the luau.

“I really enjoyed the decorations and I like how you got leied,” said Naime Laskar, a freshman biology major.

As everyone ate, Hawaiian music played on speakers in the background and great prizes were raffled off.

Some of them consisted of a box of chocolate covered macadamia nuts, Mauna Loa white chocolate chip cookies, a hula doll, Spam and much more.

The luau has been entertaining the ULV campus for more than 15 years.

“I came because I wanted to see what it was about,” said Naomi Padron, a freshman political science major.“I think it’s a good way to get the La Verne community out here.”

Island Inspirations is a Polynesian entertainment group that told stories of the Polynesian islands with their colorful dances and fire dancing show.

The entertainment started off with five women, including one ULV student, junior Taimaine Suddeth, wearing grass skirts and decorative headdresses.

They performed impressive dances from the islands of Polynesia and Tahiti.

They then changed into red Hawaiian wraps and performed a traditional Hawaiian dance.

ULV students and children were asked to come up on stage with the dancers to learn customary dance moves from Hawaii.

They learned to sway their hips with the island beats.

“It’s great and it’s fun,” said Tony Witt, a Claremont resident. “We like that it’s outdoors.”

“For the last three years we’ve really liked this show,” said Barbara Witt, a resident from Claremont. “We love the drumming and we love the fire dancing.”

Up next came the male dancers who performed a traditional dance from Samoa.

But nothing could top off the three young boys who did a dance from New Zealand.

More entertainment filled the Luau such as fire dancing by a chief.

The chief had a torch lit on both ends and he amazed the crowd by twirling it and throwing it up in the air and catching it.

Afterwards, a band performed a raggae Hawaiian style of music know as Jawaiian.

The Luau was complete with appetizing food, enjoyable entertainment, great prizes, pleasing music and everyone left with a little history of the Pacific Islands.

“People enjoyed eating good food and watching and participating in the entertainment.”

“It’s been a ULV tradition and people always look foward to it every year,” Rodrigues added.

Vanessa Avilez can be reached at vavilez@ulv.edu.