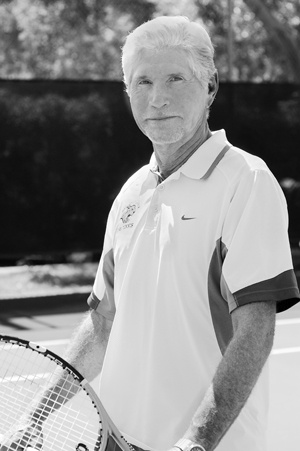 Head coach Steve Bergovoy is leaving La Verne after coaching the men’s tennis team since 1998. Bergovoy was asked to coach while finishing his bachelors of science degree at La Verne. Before La Verne, Bergovoy worked as a private tennis coach for players such as John McEnroe, Jim Courier and Ivan Lendl. Bergovoy now plans on furthering his coaching at another school. / photo by Leah Heagy

After four seasons as head of the men’s tennis team, coach Steve Bergovoy is leaving the University of La Verne this year.

Bergovoy believes that Flora will be the most qualified candidate to coach after his departure.

“I’ve enjoyed my stay here at University of La Verne and helping develop these players and the program,” Bergovoy said. “I have made lifelong friends here.”

In 1999, Bergovoy became the head tennis coach for both men’s and women’s teams.

Since taking over the men’s tennis program, he has been close to ULV and passionate about it. It was an easy decision for him to accept the job.

However, Bergovoy wasn’t offered the head coaching tennis position after earning his degree, even though he has almost 35 years of coaching experience.

In the past, he has directed tennis programs for seven cities’ park and recreation departments on more than 200 courts throughout the country.

While working under Harry Hopman, a world acclaimed tennis player, Bergovoy coached players from 75 different countries around the world to excellence.

Bergovoy was also hand-picked to work with the legendary Arthur Ashe tennis director at his club outside of Washington, D.C.

“I have accomplished a lot for this team, and even though I regret having to leave,” Bergovoy said. “It’s in the best interest for the team and their direction.”

During his years as part of Hopman’s elite teaching staff, he coached hundreds of internationally ranked juniors and world-class tennis players. Some of his pupils include former No. 1 world-ranked singles’ players John McEnroe, Jim Courier and Ivan Lendl.

“All accomplishments I have fulfilled could not leave me with this many unbelievable and some of the fondest memories,” Bergovoy said.

Bergovoy went beyond the boundary of the court and cared deeply about the athlete’s academics.

As a college sophomore in 1969, Bergovoy decided to pursue tennis by quitting school to turn pro.

Years later after his playing days were done, he returned to ULV to finish his degree. Now Bergovoy knows that having your college degree is very important and he cherishes his own.

Coach Bergovoy has taken the men’s tennis team beyond being just another easy team on the schedule.

His dedication and the team’s hard work, they have moved up in ranking in conference over the seasons he has been coaching the team.

With the Leopards, Bergovoy has coached many new and inexperienced players and still managed to keep the team competitive with their play.

The team has also gained much more respect and fear from fellow tennis players knowing that the ULV men’s tennis team cannot be walked over anymore.

“I’m sad to see him go of course, senior Kyle Fournier said, who has played under Bergovoy for three years. “I’m definitely glad he was my coach because if it wasn’t for him, I would not have played tennis.”

“The memories of these kids are one of the most rewarding in my life,” Bergovoy said.

The future for Coach Bergovoy looks bright. He has narrowed down his future coaching position down to two schools.

La Sierra is a Christian school with a new program that has been running for only three years.

The other option is Hope International University, an NAIA school that seems to have the talent with players competing on the national circuit and Division I players.

“If I do have to play against ULV it will be bittersweet,” Bergovoy said. “I’ll go to the court and do what I have to do.”

This season was emotional for Bergovoy, but he said that he has enjoyed it more than any other matches he has played or coached.

During ULV’s last home game this year, the Cal Lutheran coach honored him for his work through the years.

The match gave him goose bumps and tears rolled down his cheeks knowing that this was his last season with the University of La Verne.

“It’s sad to see someone leave who had his heart set and devoted to the men’s tennis team,” said Wendy Zwissler, an associate professor of movement and sports science.

“He is also very gracious to anyone who wants a lesson,” Zwissler said, after having a problem with her own game.

Bergovoy is sad to leave after falling in love with the campus and his teams, but he knows it is for the best and is leaving the school with dignity and pride in hand.

He leaves a team that did not have the greatest success this season but took the most from their final year with their coach.

Mercedes Bermudez can be reached at mbermudez@ulv.edu.