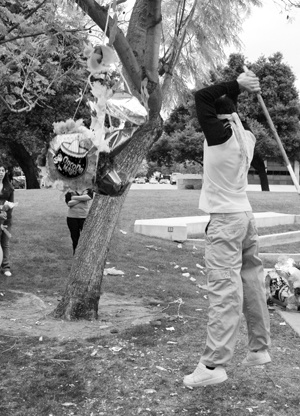 The members of the Latino Student Forum celebrated Cinco de Mayo a day early this year in Sneaky Park on May 4. Freshman Kim Rampaul joined the festivities with a turn at the piñata as students cheered him on. Along with the candy filled piñata, LSF raffled off prizes and celebrated the Hispanic heritage with music, dancing and food. / photo by Seanette Garcia

Carne asada, Spanish music and lots of colorful piñatas were all part of the annual Cinco de Mayo celebration put on by the Latino Student Forum on May 4 in Sneaky Park.

“The purpose of this is to inform students what Cinco de Mayo is all about,” LSF President Jennifer Perez said. “It’s not celebrating independence.”

Cinco de Mayo is a celebration of the day when Mexico won the Battle of Puebla against the French in 1862.

Daisy Cerezo, a sophomore member of LSF, gave a speech educating the audience on what Cinco de Mayo is and what it is about.

“I hope that they took something from it and realized that it’s not independence,” Cerezo said.

The celebration also included various activities including a game of musical chairs and a dance competition.

Musical chairs was very competitive. One by one each contestant was eliminated until a winner was declared.

In the dance competition, the women were given long colorful skirts to dance in.

Only one man entered the dance competition amongst all the women. The one man in the competition, freshman math major Genadio Pulido, won.

In each of the competitions the winners were given little piñatas as prizes. Two big piñatas were also part of the celebration.

Students were each given the opportunity to try and break it.

Each student was blind folded and had to spin around before hitting the piñata.

Music in Spanish was played during the feast.

As students were hitting the piñatas, songs by American artists could also be heard in the background.

Students who attended the event said it had a cultural impact on them.

“Since I’m going to be a Spanish minor, I’m just soaking in all the culture and fun,” freshman Sarah Keagy said.

Culture was certainly a part of this year’s celebration as Sneaky Park was decorated with red, white and green streamers, the colors of the Mexican flag.

In addition, carne asada and custard were provided for students to eat.

“I like it. The food was really good,” Brianna Gonzales, a sophomore psychology major, said.

Others felt that Cinco de Mayo is an important holiday to celebrate.

“It’s such a big part of America, why not celebrate it?” junior criminology major Taryll Sumler said.

Tona Chacon, a freshman psychology major, also felt that the holiday is important.

“I love to celebrate it. It’s one of my favorite holidays,” Chacon said.

Overall many of the students in attendance said the celebration was fun.

“It’s successful,” Perez said. “People came out and everybody seems to be having a good time.”