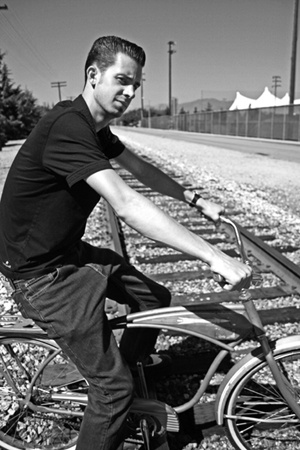 The University of La Verne’s new head cross country coach Mike Atwood, hired in August, is not only a veteran runner but also an admirer of vintage bicycles. Perched upon his 1958 AMF Roadmaster, the 25-year-old coach is a recent graduate of Biola University, where he received a master’s degree in education with an emphasis in classroom instruction. Although Atwood is new to ULV, he looks forward to growing with the students in the cross country program. Atwood will lead the Leopards’ cross country teams tomorrow at the Riverside Invitational. / photo by Catherine Campos

The University of La Verne has a new men and women’s cross country head coach who plans to push the team beyond their own expectations.

Michael Atwood has begun his first year as ULV’s cross country head coach, and when one looks at his history with the sport, there is no question that he is the perfect fit.

Atwood ran track and participated in cross country throughout high school in San Leandro, but it was not until college that he took the sport of cross country seriously.

He went to Biola University in La Mirada, where he achieved many goals that he hopes his students will one day achieve for themselves.

Atwood ran four years for Biola where he won conference championship participating in the steeplechase, which is a 7.5-mile hurdle event.

With a record like this one might wonder why he chose to be behind the stop watch instead of in front of it.

“I think I’d be a better coach than an athlete,” Atwood said.

In college he became interested in the human physiology and realized that coaching was something he always wanted to do.

Atwood started as a paid assistant coach at Biola in spring 2006 before getting hired at ULV.

His youth and history in successful competition might just be what the La Verne cross country team needs.

“I think they like me,” Atwood said about his new prospects on the team.

He has nothing but the highest of expectations for the students this year and in the future.

Atwood said his job is to get the students to run to the best of their abilities and hopefully they will even be able to compete on the national level.

He also expressed a desire to see some student-athletes achieve international competition one day.

“I’m not concerned with being their friend, my priority is their success,” Atwood said of his expectations of current and future runners.

This year every cross country athlete is required to have their own running plan and set goals to achieve during this season.

The main objectives for a recent competition at Redlands University were be competitive, out-kick opponents and hit goal times and paces.

Atwood was pleased with everyone’s progress at this competition.

Jackie Steele, a sophomore psychology major, was the top woman runner for ULV at the tournament, and Jasper Chang a junior athletic training major was top runner for the men.

“He is bringing a lot of new ideas to the table,” Steele said. “He’s pushing us more.”

Students are also excited about Atwood’s plans for the team, and do not mind the pressure he’s added to be their best.

He plans to stick to the fundamentals: speed and aerobic development.

“He’s very knowledgeable and concerned with the details,” Chang said.

He also said that Atwood is always in his office and explains why he does the things he does more than the old coach.

Teammates expect to improve this year and are excited about their new coach and his goals for them.

They know about his history with the sport and hope to one day succeed as he has.

“I want my kids to be faster than me,” Atwood said.

He only wants the best for ULV’s cross-country team and is excited about the new season.

With such a young team, Atwood intends to motivate and generate enthusiasm for the whole year.

Students are expected to achieve more than they ever believed they could and Atwood intends to be a big part of that.

As for the rest of the season, Atwood will lead both the men’s and women’s cross country teams as they will compete in the Riverside Invitational Saturday at 7:30 p.m.

Following the meet at Riverside is a homecoming of sorts for Atwood as his teams will compete in the Southern California Intercollegiate Ath­letic Confer­ence Multi-Dual meet on Oct. 13 in La Mirada.

Some runners will also be invited to participate in the SCIAC Championships which will be held on Oct. 27 in Chino.

If any Leopards qualify, they will compete in the NCAA West Regionals to be held Nov. 10.

Jordan Litke can be reached at jlitke@ulv.edu.