By Jennifer Gilderman, Rhiannon Mim on September 21, 2007 in Football, Sports 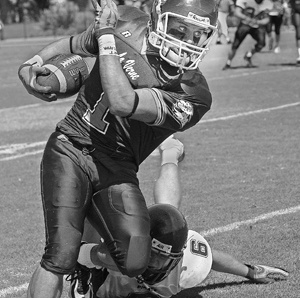 Near the end of the second quarter, University of La Verne quarterback Troy Doolittle passed to wide receiver Grady Thomas for a gain of 18 yards. Thomas caught six passes for a total of 74 yards in the game against Whitworth. The Leopards lost 34-0, for an overall record of 0-2, and have a bye this weekend. ULV will face Cal Lutheran at home Sept. 29. / photo by Rhiannon Mim

The La Verne football team was tackled by visiting Whitworth, 34-0, in its home opener at Ortmayer Stadium on Saturday.

La Verne drops to 0-2 on the season, while Whitworth improves to 1-1 after its win.

“Even though the score doesn’t show it, we played better than it looked like,” said senior quarterback Troy Doolittle, who was 22 for 44 on the day and passed for a game high 214 yards.

“We played with good tempo,” said senior tight end Anthony De Jager. “But there were a lot of mental mistakes that we need to clean up before our game against Cal Lutheran.”

La Verne’s offense took some hard hits when Whitworth’s defense scored twice on the day, once off a safety early in the first quarter to put the Pirates on the board, and the second on a fumble recovery in the third quarter to put them ahead, 19-0.

“We’re on track with where we need to be,” said Ankeny. “The guys played hard, and a lot faster than last game.”

Still Whitworth dominated the majority of the game, not only on the scoreboard but with possession of the ball for 37:29 as compared to 22:31 for the Leopards.

The tackling, hitting and running is emotionally and physically draining, but when De Jager came up big with a long drive in the third quarter, it was enough to raise the Leos’ confidence, but not enough to put them on the board.

“We need to make big plays when big plays need to be made,” said Doolittle.

On offense, receiver Grady Thomas had six receptions for 74 yards and Phi Van Le who caught six passes for 43 yards.

With next week off and SCIAC play around the corner, Ankeny is looking forward to focusing on his team.

“We’re taking care of us,” said Ankeny. “We’ll fix the things we need to correct, but I’m not even thinking about Cal Lu.”

Though La Verne has not dominated the SCIAC in recent years, with a new head coach and a new attitude toward rebuilding the football program, there is hope.

“If we’re able to bring energy for all four quarters and execute our plays, then the conference is always wide open,” said Doolittle.

“Our team is a tight unit,” said De Jager. “We can count on each other when the game is on the line.”

La Verne will host their next game, and kick off conference play against Cal Lu at home on Sept. 29.