By Campus Times Editorial Board, Matt Hill on October 12, 2007 in Editorials, Opinions 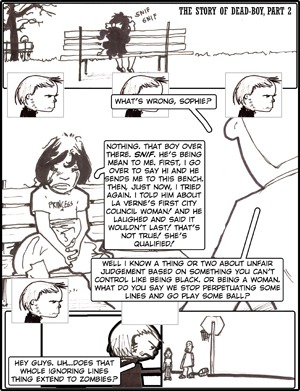 On Oct. 1, 41-year-old Donna Nasmyth was sworn in to serve on the La Verne City Council.

Nasmyth is the first woman ever to serve on La Verne’s city council in the city’s 101-year history.

A native of La Verne, Nasmyth is more than qualified to serve on the city council.

She has served on the city planning commission and volunteered on committees that help youths and seniors.

Nasmyth is also a University of La Verne graduate, receiving her bachelor’s, master’s and doctorate degrees from the University.

She is also a ULV employee as an adjunct professor of liberal studies and an academic adviser for online students. And on top of that, other members of her family are connected to the University.

It’s no wonder the council voted unanimously to have her on the team.
But this is 2007, not 1957 and women have achieved so much in the past 50 years.

Women have been serving on councils, owning their own businesses, serving as mayor and maybe next year the populous will be electing a woman president.

Currently serving as mayor of Pomona is councilwoman Norma Torres. Her biography prides herself in being the first Latina mayor, not the city’s first woman mayor.

If our neighbors have made the transition from an all-male council to having a woman mayor running the town, then what has taken La Verne so long to make this transition?

Times have changed and we’re glad the city of La Verne has finally decided to change too.

We were just wondering, why there hasn’t been any women on the council before?

Maybe there just has not been a woman as qualified as Nasmyth that could fill a spot on the city council. However, there have been male members, not necessarily in the La Verne area, who have served with questionable qualifications and actions.

Having Nasmyth on the council opens the door for other qualified women in the community.

Maybe the door has always been open for women and others, it just needed a little nudge.

Nasmyth herself doesn’t want her new position to be focused on her gender, but it becomes a big deal when no other woman has served inher position in the city’s entire history.

It may seem like the Campus Times is making this a bigger issue than it is, but the real issue lies in why the council hasn’t always been as diverse.

It’s hard to believe that there haven’t been other women with the qualifications needed in the past. We’re not looking for any form of preferential treatment based on gender or race. We understand and respect that the position of council member is based on personal qualifications, as it should be.

All this said, we do applaud the council’s decision, really.

We congratulate you for appointing Nasmyth to the city council. We just wish the desire to have qualified women on the panel had come a few decades sooner.

Contractors need oversight
On the Calendar