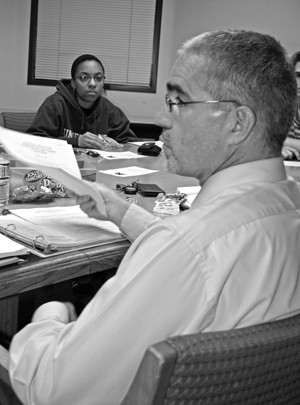 The new Multicultural Club Council meets every Wednesday afternoon in the Student Resource Center conference room. Senior Britney Collins and other students, along with their adviser Daniel Loera, multicultural affairs director, discussed their ideas for T-shirt designs to become better known on campus. The MCC will oversee such clubs as “Working on Not Disappointing Our God,” the African American Student Alliance and United Hermanos. / photo by Catherine Campos

The University’s Multicultural Club Council is getting off to a good start.

A new addition to the University of La Verne campus, the MCC has been in the works since last spring.

“What the council is, is a structure to build a capacity for collaboration,” Daniel Loera, office of multicultural services director and council adviser, said.

In a letter, Loera wrote to introduce the new council to the ULV community, he stated that the council is to be similar to that of the Greek Council started in 2004.

He also stated that, “the council would be a one-stop clearing house for multicultural and diversity programs and provide a venue for students to discuss and advocate for issues related to their ULV student experience.”

According to the MCC constitution the council “stands for service through the development of character inspired by the close contact and deep friendship in and between multicultural clubs and organizations.”

One of the many goals of this new council is to make the ULV community aware of its existence MCC president, Alan Hernandez said.

“When I first came to school a year and a half ago, we had nothing as a unity,” Hernandez, a junior math, music and art major said.

Hernandez said that the purpose of the MCC is to better the university.

He saw a need for the clubs on campus to come together to make the diversity better at ULV.

The MCC will work in collaboration with the various diversity and cultural clubs already on campus.

Loera said they hope to get delegate representatives from religious clubs, athletics and many other areas.

“We talk about diversity a lot, but nothing gets done about it,” Matthew White, MCC secretary and junior public administration major, said.

White said that the MCC will oversee such clubs as Working on Not Disappointing Our God, the African American Student Alliance and United Hermanos.

“We just really try to work with everybody to make sure they get a chance to belong somewhere,” White said.

On Oct. 4 the MCC was one of the primary sponsors for a speech given by Steven Jones.

Jones’ speech titled “I Have a Dream, We Gonna Work it Out,” was about diversity.

“We invited Dr. Jones here to get us involved,” Hernandez said.

President Stephen Morgan was in attendance and welcomed Jones at the start of the night.

“I’m delighted the clubs are joining together; it brings strengths to our efforts as a diverse community,” Morgan said.

Morgan said that there is more opportunity for conversation because of the joining of the clubs under the MCC.

“I think it’s allowing more clubs to form, to have a voice,” Adriana Serrano, a junior science behavioral major, said.

Serrano is involved with the Rainbow Alliance and the Latino Student Forum.

She said the MCC is good because the clubs will unite and have events together.

The executive board of the MCC is made up of elected students from various multicultural clubs that are part of the MCC.

The MCC has only been a part of the ULV community for a month and is planning to be a part of more events like the speech on Oct. 4.

Susan Acker can be reached at sacker@ulv.edu.

On the Calendar
Champs crowned in pop culture tournament