By Jaclyn Dino, Marilee Lorusso on October 12, 2007 in Football, Sports 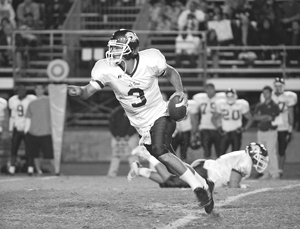 Throwing a total of 234 passing yards against the Pomona-Pitzer Sagehens, senior quarterback Troy Doolittle helped La Verne tie the game 20-20 in the fourth quarter by getting ULV into field goal position. The Sagehens defeated the Leopards in overtime, 26-20. With a record of 0-4, La Verne will face the Occidental Tigers in Eagle Rock Saturday at 7 p.m. / photo by Jaclyn Dino

After fighting their way into overtime, the Leopards suffered a heartbreaking 26-20 loss against the Pomona-Pitzer Sagehens at Earl J. Merritt Field Saturday night.

La Verne came up short after a close game that would give either the Leopards or Sagehens their first Southern California Intercollegiate Athletic Confer­ence victory.

“I just wanted to win and do whatever I could,” said senior running back Chris Handy.

Though the Leopards scored first in the game off a Sagehen fumble early in the first quarter, ULV ended the first half of play behind, 13-10.

Costly late hits and penalties slowed La Verne’s momentum down during the second half.

It allowed a quick field goal by kicker Taylor Hart to tie up the game, 20-20 and head into overtime.

“We were faced with a fourth-and-seven,” Doolittle said. “It was such a big thing for our team to overcome it.”

Doolittle said the team had been focusing on the theme of fighting as a team, sticking together and finishing the game as a unit.

“We rallied together,” Doolittle said.

Unfortunately, a win was not in the cards for the Leopards.

“We had multiple opportunities to come through,” head coach Andy Ankeny said.

ULV was unable to score a touchdown in overtime and a field goal attempt was foiled as the Sagehens were able to block the kick.

The scoreless overtime effort of the Leopards allowed the Sagehens to capitalize in victory as freshman quarterback Jake Caron scored the winning touchdown.

The win did not come easy as La Verne’s defense held Pomona-Pitzer preventing a few touchdown attempts throughout the game.

Although this was a tough loss for La Verne, Ankeny remains positive and is confident that the Leopards will continue to improve in the upcoming SCIAC matches.

“We’re getting better each and every week,” Ankeny said.

Ankeny said his team is still building which is a continuing process.

“There’s a lot going on behind the scenes,” Ankeny said.

Doolittle remains optimistic for the Leopards and even went as far as saying that ULV could pull off an upset against the first place Occidental Tigers.

“It’s the typical ‘David and Goliath’ story,” Doolittle said of the upcoming game. “It’s a huge opportunity. We have nothing to lose.”

The Leopards will have another chance to win their first game as they resume conference play at Occidental 7 p.m. tomorrow.

Following the Tigers, La Verne will host Whittier for Homecoming Oct. 20 before going on the road to Redlands Oct. 27.