By Alexandra Lozano, Jaclyn Dino on October 19, 2007 in News 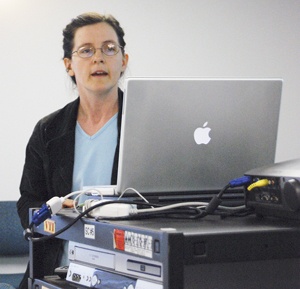 Women – watch what you eat.

Professor Christine Brous­sard and others researched how pesticides change cells in the thymus during fetal development.

About 15 people gathered in the President’s Dining room on Oct. 9 for Broussard’s lecture “The Effects of Selected Environmental Toxicants on the Viability and Development of T Cells.”

“I’ve enjoyed the company of many students,” Broussard said. The idea to research this topic was “inspiration from my students.”

Broussard explained how cells function in the immune system.

“When cells develop, many of those cells are responsible for orchestrating those responses.”

T cells develop mostly during “in utero development. Your immune system is developing and maturing.”

T cells can either become a CD4 cell or a CD8 cell.

A CD4 cell is considered a “helper cell.” It helps B cells make antibodies. Those CD8 cells are “best known for being killer cells,” she said.

“Each one of these cells has a unique receptor on the surface,” Broussard said.

There are generally more CD4 cells than CD8.

However, estrogen has a significant impact on T cells.

“Estrogen can either inhibit the development of T cells or cause death of T cells,” Broussard said.

Those who have asthma and allergies are continually exposed to some levels of inflammation of the lungs.

“A lot of research has been done. Many believe it is a CD4 cell that is the culprit,” Broussard said.

These medical issues may have been caused by a high level of exposure to toxins, so Broussard wanted to research the effects of less exposure.

“We wanted to look at low level of exposure (to pesticides), just eating food that was grown in pesticides,” Broussard said.

Broussard wanted to see if exposure to environmental toxins may alter T cells development in fetuses.

Broussard and her students tested the effects of the pesticide Methoxychlor (or MXC) on mice.

“Other countries can use MXC and we import products they produce,” biology professor Jeffery Burkhart said.

Early research was done on the amount of pesticides in children who ate organic foods and foods with pesticides.

Those who ate organic had a lower level of toxins.

This time Broussard was looking at MXC.

“We wanted to determine the range of MXC looking specifically” on the embroyic stage.

After applying the MXC to dish of thymus cells from mice fetuses, “the percentage of live cells have really gone down.”

Broussard also found that these cells can be manipulated into becoming CD4 or CD8 cells.

“If you add an antibody to T cell receptor, now you get some of those cells moving toward CD4,” Broussard said. “The toxicity or inhibition of division is occurring in effect of MXC. It took us close to two years to get it to work.”

“The next step is to actually look at humans,” Broussard said.

Alexandra Lozano can be reached at alozano@ulv.edu.