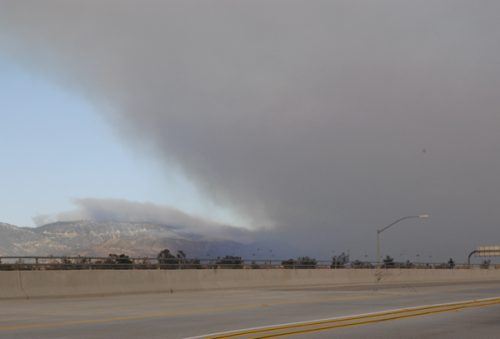 Smoke from the San Bernardino fires is visible from Fontana above the 210 Freeway. / photo by Leah Heagy 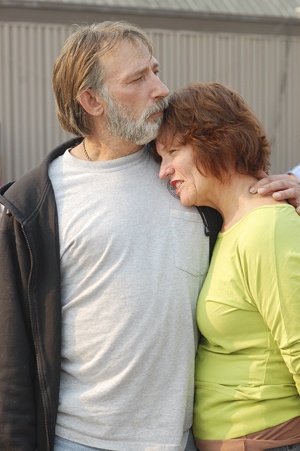 Gayle Fey and Gary Wilson share a moment as they stand outside the evacuation center in San Bernardino. The couple live in Rim Forest, a small town on the outskirts of Lake Arrowhead in the San Bernardino Mountains. Fey and Wilson have been evacuated since Tuesday, and have been staying in the shelter located in the Orange Show Pavilion. Fey and Wilson are two of many away from their homes. / photo by Leah Heagy

Receiving fearful phone calls from a younger sister trapped on a San Diego college campus, a brother risking his life to fight the uncontrollable fires. Finding out a volunteer evacuation has been assigned for her own neighborhood – all while she was over an hour away from her closest family members.

This was the reality for University of La Verne junior Jillian Peña all week, as the communications major struggled to stay focused on her studies, while the lives of her family members were thrust into chaos by the wildfires ravaging Southern California.

“If I dwelled on it, I would be a mess, but there is nothing I can do right now,” Peña said.

With fires burning in the San Bernardino area, Stevenson Ranch, Santa Clarita, Malibu, Irvine, Temecula, Camp Pendleton, and much of San Diego County, it is hard to find someone on the ULV campus who has not been directly affected by the fires.

More than 500,000 people have been evacuated from their homes – endangered by the various fires –  and the Los Angeles Times reported that more than 420,424 acres have been burned and more than 1,155 homes have been destroyed as the fires rage on.

Hotels are filled to capacity and partial freeway closures remain throughout Southern California due to fire damage, leaving worried residents wondering what their next move will be and wondering how they will even get there.

He has been in contact with his parents in Apple Valley, where closure of 15 Freeway through the Cajon Pass, has left them with the feeling of helplessness. What if something were to happen to their family members in Santa Clarita?

“I am worried about my friends and family in Santa Clarita who are waiting for word to evacuate,” Smith said. 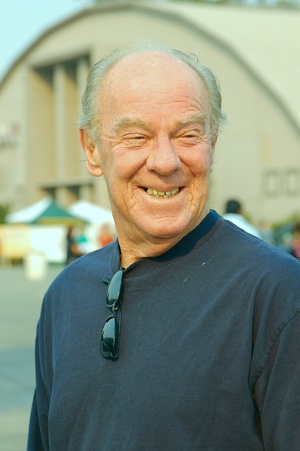 Fire evacuee Andy Eason stopped by the evacuation center in San Bernardino to check up on the containment of the fire. Eason owns the Donut Den, a small shop located in Crestline in the San Bernardino Mountains. / photo by Leah Heagy

The extensive media coverage of the devastating fires has also sparked question as to how the people affected will be able to move on once the fires have been extinguished.

On Wednesday, President Bush declared the areas affected by the California fires as a state of emergency.

This declaration it will make it easier for fire survivors to receive financial assistance through tax cuts on homes, as well as medical cost reimbursements and assistance on home repairs.

She realizes that her place right now is at the University since she cannot do anything at home and if she went home all she would be able to do is worry.

“We have dealt with fires in San Bernardino before, it is still scary, but we know what to expect and how to react,” Peña said.

As word spreads via different sources across campus, several students are nervously awaiting updates from family members and friends back home to see how the fires are affecting their hometowns, and whether they will in fact have homes to return to.

Kaitlin Eckert, sophomore psychology major, has been keeping her cell phone charged and with her at all times because her Escondido family home is under the sanction of a mandatory evacuation.

Eckert expressed her concern for her friends back home because she knows many people who live in the neighborhoods that the fires have swept through.

“I have been trying to keep busy, to no think about it,” Eckert said.

The Rancho Santa Fe School District where Chavarin works has cancelled classes for the remainder of the week due to the close proximity of the fire.

Chavarin has been following the advice of the news reporters to stay off the roads in order to not block the way for emergency vehicles.

“The fires are very unpredictable, so you don’t know what they are going to do,” Chavarin said.

“Forty-five families around my school have already lost their homes from the fire.”

Hopefully there is an end in sight.

Weather reports claim that the temperatures will be dropping in the next several days.

This will be good news for the firefighters who need this break and the chance to take control of the fire.

“We appreciate all of the community support when big fires like this happen,” said La Verne Fire Department battalion chief Alan Chandler.

“The people being affected by it right now are in my prayers,” Peña said.

A variety of organizations are accepting donations of cash and other commodities for victims of the fire.

For information on how you can help, contact the American Red Cross at www.redcross.org or (800) RED-CROSS and the Governor’s Office of Emergency Services at www.californiavolunteers.org or (800) 750-2858 between 8 a.m. and 10 p.m.

Cerina De Souza can be reached at cdesouza@ulv.edu. 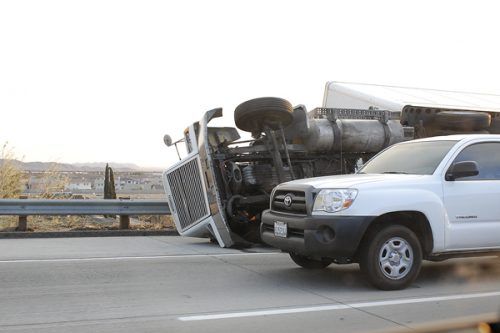