By Danielle Lampkin, Jaclyn Dino on November 16, 2007 in Sports, Volleyball 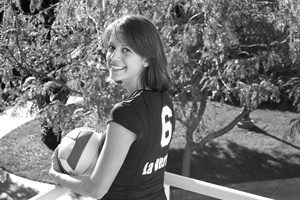 Leading the Leopards with 429 kills this season, Brianna Gonzales, a junior at the University of La Verne holds the team’s best and a career-high of 36 kills against Washington University. Turning the heads of the American Volleyball Coaches Association, they named Gonzales First Team All-America. Last week, Gonzales, a psychology major was named SCIAC Player of the Year. In addition she has been honored as SCIAC Female Athlete of the Week three times as well as earning All-West Region honors this season. / photo by Jaclyn Dino

Year in and year out, the goal every season for the La Verne women’s volleyball team is to continue to be reigning Southern California Intercollegiate Athletic Conference champions.

It is an accolade that has become common for the program, its players and the several competitors in the SCIAC.

“That’s our program, to be the SCIAC champions, from the first day we recruit, we tell our athletes that and for that reason everyone on the team earned that title,” head coach Don Flora said about his team, that ranked No. 4 in the nation at one point this season.

The title never promised is SCIAC Player of the Year, which was earned by ULV co-captain Brianna Gonzales, a junior outside hitter, for her performances in the 2007 season.

“Hands down she worked her butt off and her work paid off. She is now being honored for something she earned. It is great,” said senior co-captain, middle blocker Tiona Hobson.

Gonzales, a Whittier native, majoring in psychology at ULV helped lead her teammates to their 14-0 conference mark.

Throughout the season, she had several consistent efforts and performances, in ranking high in kills per game (3.88), hitting percentage (.250) and digs per game (3.67).

Known amongst many as being a focused individual, Gonzales does not limit herself when it comes to her other activities.

Multitasking her ability to lead she is also a student leader at ULV, being a co-leader for Athletes in Action, a club based on developing relationships between students and their religious beliefs.

“She is a hardworking person in everything she does,” said Ryan Jordan, senior treasurer of Athletes in Action, a student worship club at ULV.

The club does not discriminate against people who are perhaps non athletes, but instead seek out people who are experiencing the college life and can relate to life with fellow peers.

“Bri is a genuine person, but for her team she is the utility player. She can do it all, she approaches everything with a really good focus,” Jordan said.

A main goal for Gonzales this year was to win the SCIAC championship, which she won with her team this season.

“It is really nice to know that I have the support of my team behind me and to see how happy they are for my achievements; it is greatly appreciated,” Gonzales said.

Rapidly breeding SCIAC Players of the Year, Gonzales’ honors will mark the 15th time a ULV player has been given the award.

It is a distinction that has been earned by six ULV players in the past nine years within the conference.

“Earning such honors is a mirror of our athletic program,” Director of Athletics Chris Ragsdale said.

Not knowing of Gonzales’ achievement, Ragsdale was excited to hear of the young athletes honors.

“It is a great achievement to earn for an athlete and a great addition to our volleyball programs already many accomplishments,” Ragsdale said.

Progressing steadily during her time at ULV, Gonzales has earned Second Team All-SCIAC selections during her freshman and sophomore years of play.

“She is definitely a very hard working athlete seen in the training room. I’m happy for her.” Director of Athletic Training Services Joanna Engel said.

Her athleticism was a key factor in the growth of Gonzales as a volleyball player.

“Her progression as an athlete during her freshman and sophomore years along with a lot of hard work has earned her this title, but most importantly the support of her team,” Flora said.

Grasping on to what the Leopard tradition is, Gonzales has experienced two SCIAC league championships during her years at the University.

“I have had the pleasure of getting two SCIAC titles but never have I experienced a championship with an undefeated season like this year,” Gonzales said.

Shining her way into a winning season shared amongst her teammates has been an unforgettable experience for Gonzales.

But for the University’s sports program, she will be seen for her dedication and fine representation of the women’s volleyball program in the 2007 season.

“Getting the SCIAC Player of the Year is good and all, but I would take our 14-0 SCIAC league championship title over that any day,” Gonzales said.