By Catherine Campos, Giselle Campbell on November 2, 2007 in News 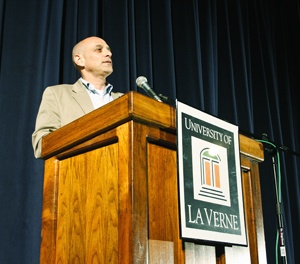 As a writer and investigative journalist, Eric Schlosser has researched and written about fast food and the American black market. Schlosser’s well-known book, “Fast Food Nation: The Dark Side of the All-American Meal,” was published in 2001. Schlosser was a guest speaker sponsored by the Office of Student Life, Campus Activities Board and ASULV at the University of La Verne on Monday. Schlosser spoke to a full house in Founders Auditorium. He encouraged everyone in attendance to continue their education because, he said, “knowledge is power.” / photo by Catherine Campos

Knowledge is power. That was the core message Eric Schlosser expressed when he spoke to University of La Verne students, faculty and staff Monday in Founders Auditorium.

The event, which drew a large crowd, was sponsored by the Office of Student Life, the Campus Activities Board and Associated Students of the University of La Verne among other groups.

Schlosser, the award-winning author of “Fast Food Nation,” directed his often-witty lecture towards the

University’s freshmen class and encouraged them to continue their education and be empowered by it.

He began by addressing what inspired him to write “Fast Food Nation,” a book that exposes the previously unknown dark side of the fast food industry in America.

“It’s not a cheery book,” Schlosser said. “Bad things happen to those in the bottom of society, but that’s why I wrote it. You can tell a lot about a society by the way it treats the weakest.”

“Writing this book made me angry, but optimistic.”

His work has been compared to the work of another muckraker, Upton Sinclair.

“His speech made me want to read the book, and find out what he was talking about,” Telon Weathington, a junior communications major, said.

The author compared the process of book writing to that of attaining a college education, but stressed that if one does not self-evaluate the knowledge they’ve gained, it is nearly useless.

“If all you do is repeat what you’ve been told, you’re wasting your time. You might as well be a machine,” Schlosser said.

Knowledge and what is considered right can be transformed only if it is challenged. Schlosser emphasized that it’s up to those who seek a higher learning to confront this, and should not simply accept information presented at face value.

“Challenge your teachers. Ask them tough questions. They’re not always right,” Schlosser said, to the pleasure of many in the audience.

Schlosser went further to explain that there are institutions in our society – like the fast food industry – whose sole desire is to control individuals.

Through this control, they gain brand loyalty and thus in many ways, customers for life.

However, what happens if the company’s product is harmful to its users, or they don’t treat their workers with basic human dignity and respect?

The only way to be freed from the spread of this misinformation and deception is through knowledge.

“It was very informative. He’s a man doing something that obviously a lot more people should be doing. Instead of having the fog cover his eyes, Schlosser’s trying to better society,” senior Evan Mobley said.

Schlosser took questions from the audience toward the end of his speech. The inquiries ranged from the issue of the fast food industry and their treatment of immigrant workers to one professor’s question regarding the benefits of indulging at In-N-Out versus other fast food joints.

Though the work of investigative journalism can be depressing or disappointing at times, Schlosser maintains high hopes for the future.

“A small group of people can change the world in a short period of time,” Schlosser said. “If thing’s aren’t inevitable, then things don’t have to be the way they are.”

Giselle Campbell can be reached at gcampbell@ulv.edu.