By Campus Times Editorial Board, Matt Hill on November 9, 2007 in Editorials, Opinions 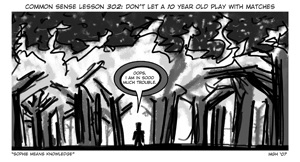 Imagine seeing your neighborhood on fire. You are asked to evacuate your house because it is in the direct path of destruction.

You have to pack your clothes, important documents, jewelry, photo albums and take your family and pets to the nearest shelter. You spend days wondering whether your house is still standing.

Finally, you get word that you and your family can go back to your house.

Unfortunately for your family, your house is gone. All that is left is ash and memories.

How would you feel? Devastated, sad, mad, frustrated?

What makes the situation worse, you find out later that a 10-year-old boy started the fire while playing with matches.

This is the current issue the district attorney in northern Los Angeles County is faced with.

After the destruction the Buckweed fire in Agua Dulce left behind, it was revealed that a 10-year-old boy started the wildfire while playing with matches, according to the Los Angeles Times.

Now it is being decided whether the 10-year-old will face charges or if his parents will.

There are so many questions that come out of this devastating event. Where were the parents? Why did an unsupervised 10-year-old have matches?

The Buckweed fire burned more than 38,000 acres and took 15 homes down in flames, according to the Times.

There is no known history of the child or family having problems, but the question now is what happens next.

It is obvious that a 10-year-old should never be left alone with matches, especially in an area full of dry brush during the Southern California fire season. A child should never have any object that could start a fire, especially unsupervised.

Whether a child knows right from wrong, the chances of fire are so high in the Southland that it is ridiculous to leave matches or lighters within reach of children. They may not fully understand the potential that a little matchstick or lighter can do.

Even if a child or teenager does know the potential damage that could happen, it is always important to be cautious.

There should be more fire prevention workshops, classes, campaigns, etc in schools. What happened to the good old days of Smokey the Bear and his catchy motto: “Only you can prevent forest fires?”

It seems harsh to prosecute a 10-year-old who may or may not know the damage he has done and the lives he has affected, but there should be some sort of punishment. He should have to do community service, participate in fire prevention and pay some sort of fine.

Yes, we know he is 10-years-old, but this is where the parents come into play. Parents should teach their children the idea of right and wrong, like fire prevention and never playing with matches.

Even though this particular incident, and other incidents of this kind for children 12 years old and under, is not considered arson, homes and buildings were burned down, families lost prized belongings and cities were turned upside down.

Their lives will forever be affected by this fire.

This is the perfect example of why it is so important to teach our children the basic rules of life.

This one being: don’t play with matches.