By Campus Times Editorial Board, Matt Hill on November 30, 2007 in Editorials, Opinions 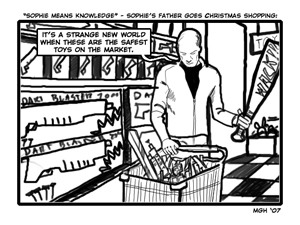 Black Friday has passed and now the rush begins to get the perfect gift.

But what happens when the toys are too toxic to play with?

Will there be no Christmas for these kiddies?

With the recent recall of the more than 69,000 made-in-China toys, it’s buyer beware for parents purchasing toys this holiday season.

The number of recalled toys this year has grown at an alarming rate.

Parents not only have to be concerned about small parts, but now the possibility of lead and GBH lurking in the toys.

Aqua Dots are the newest Chinese-made toys being recalled for safety reasons.

No, they don’t contain lead, but something worse. When swallowed, Aqua Dots actually mimic rohypnol – the date rape drug.

Those cute little beads that can be molded into any creation when wet, can surely mold a kid in a coma, when swallowed.

Three children in Australia have already been hospitalized as a result of the beads.

Both children began vomiting and fell into a comatose state after ingesting what seemed to be an innocent bead.

According to www.aquadotsrecall.com, “Children who swallow the beads can become comatose, develop respiratory depression or have seizures.”

It has been found in lunch boxes and made-in-China toys, but it is also reported to be found in some sweet treats.

Recently reported was the concern of lead in Mexican candy. Researchers found that lead in this candy may cause brain damage.

A report posted on the Centers for Disease Control Web site from 2002 explains five cases of children affected by lead poisoning caused by eating Tamarind candy. These cases are from the Stanislaus, Fresno, Orange and Los Angeles counties.

Through routine screening, each child was found to have elevated blood lead levels not caused by Mexican pottery (known for containing lead) or folk remedies, but by their imported Mexican candy.

Looks like candy may be scratched off parents’ shopping lists as well.

As the scrounging for Christmas gifts begins, Americans are warned to be safe this holiday season. There is a lot to be aware of: crowds, identity theft, weather hazards.

So much for the perfect gift.

It seems toys are the most dangerous thing Americans have to watch out for this season.

Toy companies should try to take the time to make toys safe because children value them so much. Especially during the holidays: kids look forward to it all year.

Perhaps it’s time to rethink our recent tradition of outsourcing manufacturing of toys among many other things to the cheapest bidders. For the sake of the children, please stop such activities before they further erode the holidays’ spirit of giving.

ISAC celebrates Thanksgiving
Soda machine too smart to use