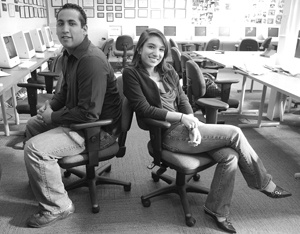 Journalism majors Galo Pesantes and Erin Konrad have been named by the communications department as editors for spring 2008. Pesantes, in his second semester as an editor for the Campus Times, will assume the position of editor in chief. Fall was Konrad’s first semester writing for La Verne Magazine. In the spring, she will serve as editor of the publication. / photo by Wei Huang

It’s that time again, time for the communications department to announce two new editors to carry the La Verne Magazine and the Campus Times through another successful semester.

The positions are offered to students who have demonstrated exceptional work in the past and have earned the respect of their professors and peers.

They require a great deal of responsibility and dedication and are only offered to students who can represent and lead the entire publication.

Pesantes spent one semester as a staff writer on the Campus Times and served for the past two semesters as sports editor.

“He’s smart, consistent and he knows his stuff,” said Elizabeth Zwerling, associate professor of journalism and Campus Times adviser. “He’s also easy to work with and has the respect of his peers.”

“I never thought I could be an editor in chief,” Pesantes said. “It all seems surreal now.”

Next semester Pesantes hopes to maintain the standards of past editors and improve the content of the newspaper, making it more popular on campus.

“I want to make it even better,” Pesantes said.

He is very excited about the opportunity and is looking forward to working with returning editors and staff members as well as some fresh new faces.

“I think it is going to be a really good semester,” Zwerling said.

Konrad, who said she is also looking forward to her new position on the Magazine, has served as Campus Times arts editor as well as staff writer for both publications.

“She has a good sense for how a story goes together and what to look for in stories,” said Randy Miller, adjunct professor of communications and La Verne Magazine adviser.

“It’s definitely a privilege to put out such a great publication,” Konrad said.

The La Verne Magazine has recently received a “facelift” thanks to Andres Rivera, a senior journalism major with a minor in multimedia.

With a fresh new look and a new leader, the La Verne Magazine is sure to have one of its best semesters yet.

“I have a lot of new ideas,” Konrad said.

Along with the Campus Times, Miller also hopes to make the magazine better known and get it into more people’s hands by continuing to find fresh stories and angles.

Along with the new editors, Hannah Nakama, junior radio broadcast major, will continue to lead KULV as the program director.

The position of program director, unlike publication editors, is a yearlong position that is decided at the end of each spring semester.

When Nakama joined the KULV staff, it was her personal goal to become program director.

“I feel like this semester was really great,” Nakama said.

So far she has led KULV through a great semester with a rather large staff consisting of only one veteran. She plans to continue through the spring.

“We plan to do a lot of new things this upcoming spring semester,” Nakama said. “More KULV in your face, but harder and stronger.”

With three promising students leading the University’s media outlets, spring 2008 promises to be exciting for media on campus.