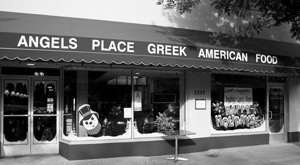 Angels Place, a new restaurant in Old Town La Verne open since October, is located on D Street next to Ellsworth’s Stationers. Angels Place serves up Greek and American food and features specials such as a bacon burger and gyro sandwich. They offer 33 tables and an outside patio so diners can find the perfect spot to eat and hang out. / photo by Steven Bier

A taste of Greece has joined downtown La Verne’s neighborhood of restaurants.

Angels Place, a Greek and American restaurant, opened in October in the storefronts recently vacated by Nick’s Place and a dry cleaner.

For those who have never tried Greek food, don’t be intimidated.

The gyros are a familiar choice for a Greek meal, and they do not disappoint.

If you are not quite ready for a meal, try the Tzataki, which is a cucumber yogurt dip served with warm pita bread.

But the best part has to be the service. Everyone is friendly and makes you want to go back.

Do not be surprised if you see owner Alexia Galanis serving tables and running around.

Galanis said the restaurant was her idea, but she has support from her family.

The décor of Angels Place is a lot warmer and brighter than the previous establishment.

After the building’s earthquake safety regulations were updated, construction began.

“Pretty much the only thing that stayed is the patio,” Galanis said.

Neutral colors were used to welcome diners into the restaurant’s warm and friendly atmosphere.

Galanis is reaching out to the University of La Verne community with a 20 percent discount for students.

Baca works at Angels Place and said she has never worked at a restaurant prior to this.

“We thought it would be a good opportunity,” Galanis said. “We wanted to have something homemade.”

Angels Place brings something a little different and unique to the area, Galanis said.

Going out for dinner doesn’t have to be super-expensive, and Angels Place caters to the area with fair prices.

For lunch or dinner, Tzataki, calamari and grape leaves are available as “Greek starters.”

Greek style dinners are available with some choices including Pastitsio pasta and gyro plate.

All of these dinners are served with a small Greek salad and pita bread.

“People love it,” Baca said of the Greek options. “Once they give it a try, they’ll love it.”

For those who shy away from Greek food, sandwiches and burgers are also available and are a draw for people to take a chance and come into the restaurant.

“It ties in the culture of La Verne,” Baca said.

All we want for Christmas is…
Bowl For Breath