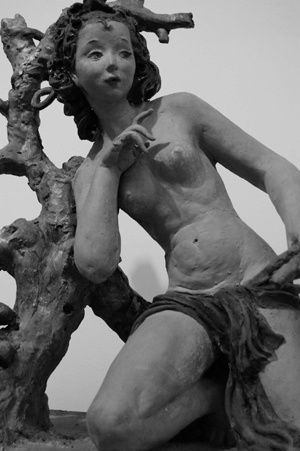 The Claremont Art Museum’s recent exhibition, “First Generation,” brings together works by prominent local artists dating from 1907-1957. Included is the sculpture “Girl Watching Bird,” created by Susi Singer in 1946. Singer, who was born in Austria in 1891, moved to California in the 1920s. / photo by Leah Heagy

“First Generation: Art in Claremont, 1907-1957,” an exhibition featured at the Claremont Museum of Art, attracts residents who enjoy the artwork of historic Claremont and the town’s early history.

Steve Comba is the guest curator for the “First Generation” exhibition. The exhibition focuses on art in Claremont during the first 50 years of the town’s existence. Many artists were drawn to Claremont and surrounding areas, such as the Mt. Baldy foothills.

Due to the development of new schools and colleges in Claremont, many painters and photographers found themselves attracted to the area and claimed the town as their artistic haven.

The area began to rapidly grow and its population greatly increased as more and more distinguished artists turned to Claremont as their home.
The exhibition contains artwork from artists such as Hannah Tempest Jenkins, Emil Kosa Jr., William Manker and Millard Sheets.

The art displayed in the gallery consists of different paintings, sculptures and ceramics by both professional artists and the artistic works of past students from Scripps College. Artists from Scripps include Phil Dike, Henry Lee McFee and Jean Ames.

“My favorite piece in the exhibition has to be the painting by David Scott,” said Melody Kriesel, museum associate and Claremont resident. “I just feel a certain way whenever I view his artwork.”

This is Kriesel’s favorite exhibition, because she loves to see the rural side of California before it became heavily populated.

Pieces that significantly stand out are those displayed on a wall by artists Jean Ames and her husband, Arthur Ames. Beautifully crafted plates, mosaics and paintings hang from the white wall only to bring out the colors and detail of each artwork. A gallery visitor shares her personal attachment to this artistic couple.

“I actually moved in to the house that belonged to Jean and Arthur Ames,” Catherine Vickers, a Claremont resident, said. “My bathroom is gorgeous. The walls are covered with tiny pieces of teal-colored tile. The mosaics on the wall were actually put there by the couple. I have their artwork on my bathroom walls.”

The tiles are similar to the colors on the piece in the exhibition by Jean Ames titled, “Angel” from 1950, Vickers said.

“Angel” is a copper plate covered in colored enamel similar to a painting. The piece features an angel on a bright teal background.

The house that formerly belonged to the Ames’ is located at the top of Padua Hills in Claremont.

Another gallery visitor, a friend of Vickers, shared her connection to the artists featured in the exhibition.

“I used to know almost all of the artists in this gallery,” Susanna Hammond of Claremont said.

Not only did she know many of the artists, but her mother had a significant relationship to an artist in the gallery as well.

“My mother used to work in the studio with William Manker,” Hammond said.

Manker has three porcelain pieces on display in the gallery and is known for perfecting a technique of thin glazed porcelain.

The edges of the porcelain pieces are thin, similar to the feel of glass.

Hammond’s mother worked with Manker in 1947 and learned the techniques to perfecting thin glazed porcelain.

The Claremont Museum of Art has held several programs to involve the Claremont community with art.

The “First Generation” exhibit will be up until April 27.

Admission is $3 for adults and is free for museum members and anyone under the age of 18.

The museum is located in the Packing House at the Claremont Village on West First Street.