By Galo Pesantes, Leah Heagy on February 15, 2008 in Sports, Tennis 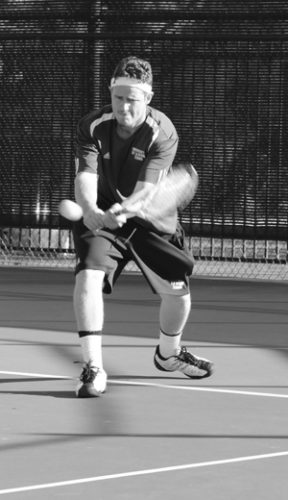 The Leopards grounded the Caltech Beavers, 8-1, Feb. 9 at the Claremont Club Tennis Courts. Senior player Evan Mobley returns a serve and goes on to win the doubles match with teammate Joe Manfre. The Leopards travel to Whittier for their next match on today. / photo by Leah Heagy

In its third match of the season, the University of La Verne men’s tennis team captured its second win and its first victory in the friendly confines of the Claremont Club against Caltech, 8-1.

The Leopards were coming off a loss against Azusa Pacific on Feb. 9 where ULV dropped all nine sets, losing 9-0. Before the match against APU, La Verne had a strong first win on the road against La Sierra and former head coach Steve Bergovoy.

“I think we are going to be a pretty good team this year,” junior Adrian Laygo said. “We should be able to get pretty far in conference.”

Against the Tigers, the Leopards managed to take all three doubles matches and nearly all the singles sets in their first Southern California Intercol­legiate Athletic Conference match-up of the season.

In the doubles matches, all three Leopard teams dominated the Tigers from the start. The No. 1 doubles team led by junior Alex Muresan and freshman John Paul Arreglado won their match, 8-2 while the second doubles team had Laygo and senior Mario Backus also won, 8-2.

The Leopards completed their sweep when seniors Joe Manfre and Evan Mobley won their match, 8-4. The Tigers strongly competed throughout the match but Manfre and Mobley were able to connect on their shots and volleys when it counted most.

“It was the first time we played together this season,” Manfre said. “Once we got our rhythm going, we handled them pretty well.”

In the singles matches, the Leopards nearly swept all six matches against Caltech.

However Mobley was unable to capitalize on mistakes and failed to complete the shut out for La Verne in his singles match.

“I completely lost focus,” Mobley said of his loss. “I just wanted to keep my competitive fire throughout the match and I wanted the competition.”

Despite the blemish on the scorecard, the Leopards seem to be heading in the right direction this season under the first year head coach Don Flora.

“I think he brings a lot more discipline than last year,” Manfre said. “Most of us respect him because he is a winner and hopefully he can bring that to the tennis team to this year.”

Flora is no stranger to the tennis scene at La Verne even with his duties as head coach of the women’s volleyball team. During his undergraduate days at ULV, Flora played on the Leopard tennis teams for three seasons and is also an active member of the USTA tennis team for the Claremont Club.

As for the Leopards, they will try to earn their third win of the season at Whittier today at 2 p.m. prior to playing on the road tomorrow against Cal Lutheran at 9:30 a.m. ULV will then play two more road matches against Cal Baptist and Redlands before playing Cal Lutheran back on their home courts at the Claremont Club on Feb. 23.