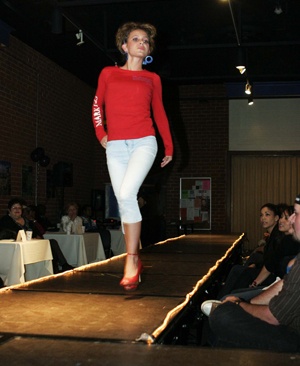 Sara Weythman, a senior, models a red long-sleeved top at the Sister Circle fashion show Feb. 27. The top, which carries a Bible verse, is from Deeply Rooted Apparel, a clothing company with “fashion that brings together a lasting style for the progressive Christian.” / photo by Rhiannon Mim

A fashion show, hosted by Sister Circle, had a big turnout and made University of La Verne students sing and dance in the name of Jesus Christ on Feb. 27 in Davenport.

Sister Circle, a ULV campus organization that focuses on unifying women, produced a fashion show to help upcoming designers, nationally and locally, to get their names out to the public.

Cherie Burks, community and scholarship chairwoman of Sister Circle, was the only ULV student who was a designer in the fashion show.

“I did this show for Cherie so that she could see her potential and get inspired by other designers,” Monique Chambers, president of Sister Circle said.

The show was held in Davenport, which was completely transformed with a runway running straight through the middle of the dining hall.

Chairs were lined on one side and tables set up for family and church members were on the other side.

At the end of the runway, where most of the students were seated, rows of chairs filled the room.

A DJ booth was set up and speakers surrounded the room. Music was continuously played throughout the show, with current songs during each designer’s collections and artists who performed in between them.

When Burks was asked before the show on how she felt she said, “I am so nervous, but very ecstatic.”

Burks said her favorite piece that was featured in her collection was the blue gown that was presented toward the end of the show.

Although this fashion show was to support the designers, it also had another major purpose: Christianity.

“This is a major event,” Burks said. “We hope this fashion show will get people involved in the community and reach out to God.”

Sister Circle produced the show in order for people in La Verne to “recognize that the kingdom of God is free,” Chambers said.

All of the designers in the fashion show are Christians and had some of their designs to demonstrate their beliefs.

A popular designer at the show was Deeply Rooted, which had several tops for men and women that had phrases such as “Purpose” and “Faith.”

This designer was a crowd favorite and was selling these shirts and other items at a merchandise booth, which was swamped during intermission and after the show.

A ULV student who modeled in the show shared her experience.

“After doing the show, it made me want to actually start modeling,” said Marlindy Bratton, a liberal studies major.

Bratton modeled for Deeply Rooted and Brown and walked the runway with poise and confidence.

Bratton is a member of Sister Circle, but found out about the fashion show through a flyer posted on campus.

“I saw the flyer for modeling auditions and thought it would be fun,” Bratton said.

During intermission and after the show, merchandise from several of the designers was for sale.

There was also a Cookie Lee booth and a table that was selling a unique variety of shoes and jeweled jeans.

Throughout the show items from some of the merchandise booths were being given to the audience and some were only given to the winner’s of small contests, such as a walk-off, in which the winner was awarded a brand new pair of heels.

In between each designer was a performer who sang specifically in the name of the Lord. The artists who performed during the show are all affiliated with a church and sang gospel songs.

Jim Gettum, a gospel rapper, performed two songs that were original works that focused on the women in the crowd and God.

Alongside the runway was a gospel choir, also known as a Christian Revival. They sang along with some of the performers and got the crowd moving by standing up and clapping to the beat.

At one point during a performance, the entire crowd was up and out of their seats, clapping and singing along.

The fashion show was free to attend and was truly an overall success with a big turnout of ULV students, Sister Circle members, friends, family and several members of a church.