By Campus Times Editorial Board, Matt Hill on March 7, 2008 in Editorials, Opinions 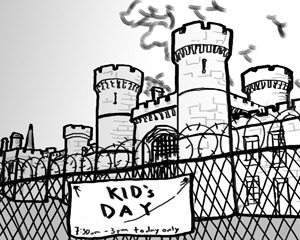 Congratulations to the wonderful United States of America, a country in which citizens are given the chance to be protected by the freedoms of speech, religion, press and expression.

So we should all pat ourselves on the back because, yes, our so-called free country has just set a new record. Last Thursday a study was released by the Pew Center on the States stating that currently one out of 100 American adults is in jail or in prison. This is the highest percentage ever at any point in U.S. history.

What does this mean for us? Our tax money, more than $49 billion worth, is funding a flawed – and growing – prison system. But for all the money spent on corrections today, there has yet to be a clear and convincing improvement in public safety.

States need to rethink their reliance on prisons for lower-level offenders and find strategies that are tough on crime without being so tough on taxpayers.

So really, unless those 9 foot-by-9 foot cells are decorated with Ethan Allen and Morton’s Steakhouse is serving up their scrumptious meals, where exactly is our money going?

Though we might struggle to find the answers on our financial obligations, we might want to dig deeper into the meaning of why so many citizens are being charged with federal offenses.

Why has the inmate population increased in 36 states in just a one-year span? Kentucky is leading the pack with a 12 percent increase in its prison population, even though its crime rate has only increased three percent over the past 30 years.

While we should be thankful that our crime rate has not sky-rocketed, we should re-evaluate our “three-strikes” rule, which is causing the hype. The report stated prison and incarnation rates do not reflect a parallel increase in crime or in the nation’s overall population. With that said, more people are behind bars mainly because of our tough sentencing, such as the “three-strikes” laws, that result in longer prison sentences.

Just like in baseball, three-strikes, you’re out. It does not matter how petty the crime is; if an inmate gets caught stealing (even if it’s a bottle of vitamins) or selling drugs and is put in jail three times for the same offense, they are in for 25 years to life. The “three strikes” laws came when Americans decided to jump on the “Get tough on crime” bandwagon.

But getting tough on crime is not the sole issue. Instead, our government has failed at the rehabilitation part of the prison system. It is one thing to lock someone up for doing wrong; however, if we fail to correct their immoral behavior, we are sending the same people, with the same problems back into our country.

And of course this brings us to the point of recidivism, meaning that those who go to prison are more likely to go back once they are released.

Indeed they would. Why? Because who do you hang out with when you are in prison – other prisoners, who have anything but outstanding ethical morals.

Then once an inmate has been released they are sent back into the real world, where they are expected to get an education or a job.

However, this isn’t as easy as it sounds. Because that little check box on a job application that asks, “Have you ever been convicted of a crime?” does not swing in their favor. So the only Ph.D. that these individuals will receive is that in the school of crime, all thanks to recidivism.

Additionally, the report said that the United States is the world’s leader with 2,319,258 prisoners.

This figure is far ahead of more populous nations like China, who only have 1.5 million incarcerated, and Russia, who have 0.62 percent of their population behind bars.

However, who are we kidding? If we hold other countries’ citizens captive, then why not lock up our own?