By Campus Times Editorial Board, Matt Hill on April 11, 2008 in Editorials, Opinions 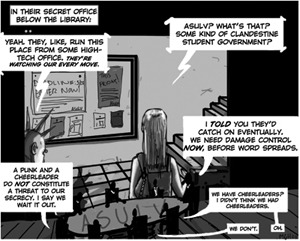 The polls for the Associated Students of the University of La Verne closed Wednesday with very few people knowing that the polls had ever opened. Booths were set up around campus each day to gather voters’ attention but their efforts could have been better.

Elections are held every year for ASULV senators and senators-at-large, along with president and vice president. And every year the turnout for candidates and voters is minimal.

This year, like most years, the candidates for senator ran unopposed. The only category with competition was president and vice president. There is no competition in the other categories because they either have the exact number of delegates needed for the position or there are not enough candidates running.

One reason for the lack of campus participation could be the lack of effective communication.

Before the elections even began, ASULV posted flyers. The flyers were plain black or green with information about applying run at the bottom of the flyer. It was not exactly eye-catching. There are so many other flyers on the bulletin boards that are colorful and bright that ASULV’s plain poster could easily be overlooked.

They had informational sessions, but those too had limited success in attracting attention.

It would have been helpful if the candidates had made an actual effort to campaign so the students would know who they were voting for. Of course we at the Campus Times were more than a little surprised that ASULV never contacted us this entire election cycle.

Some voters did not know the candidates for their college senator. Some may have voted for unqualified people because they did not know who was running. Most ULV students simply didn’t vote at all.

Playing the guessing game with student government ballots is not advisable in a community such as ours. Elected students can have an effect on the quality of experience we have here. If the wrong people are in office, we could all suffer.

ASULV was co-sponsor and had a presence at the University’s “Take a Stand” fundraiser on April 3. A booth was set out for mock elections and a dance was held that night to announce the ASULV candidates. It was a great publicity tool, but this also was poorly advertised. The majority of the people who attended the dance were people in ASULV and the Campus Activities Board. They already knew the candidates.

Another reason people may not vote is the lack of competition. Since the application process to run for a position is poorly advertised, many people do not run. Elections are about choosing who we want to represent us on campus, but in this case the representatives have been chosen by default.

Here is some advice to ASULV: It would be nice to have an actual competitive election week with campaigns, meet-and-greets and maybe even speeches, although it’s not necessary. We just want to know who the candidates are and what they plan to do.

There are several different ways that effective advertising could be done.

They could have colorful posters, use Facebook to announce the application process, post announcements in Davenport Dining Hall. Or they could give a press release, or two, to the Campus Times to write stories announcing elections and profiling candidates.

For such a large-scale event, advertising should not be limited.

It is too late to change it for this year. The results are in.

But there is a year before the next elections, ASULV officials, so start thinking about ideas to get the entire campus involved. If you make the effort, the students will make the effort.

Airlines fail their passengers
On the Calendar