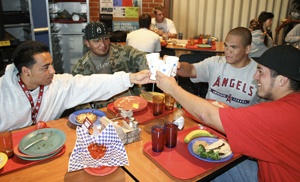 Inspired by the music of the mariachi band playing in the background, La Verne students David Merlos, Armando Jimenez, Branamier Courtney and Travis Arroyo offered cheers to César Chávez. Campus Activities Board sponsored the Happy Hour in Davenport to give students an opportunity to celebrate César Chávez Day. / photo by Troy Doolittle

Few people realize that March 31 is celebrated to recognize the achievements of Chavez, a Mexican-American farm worker, who fought to improve labor conditions for farm workers across the nation.

“The tacos were amazing,” sophomore Naime Laskar said.
“Davenport has never had such good food.”

Haro, who coordinated the event, wished the dinner would have highlighted Chavez beyond the fact that it consisted of traditional Mexican entrees. 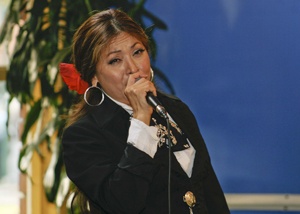 Cindel de los Reyes, CAB Special Events Chair, was behind the counter serving virgin piña coladas to add to the festive mood of the event.

Aside from the delicious food and drinks, the band put on a lively and entertaining performance during the meal.

“Not only does it show the different areas of music, but it shows diversity, which I think is important,” Jacob Delgado, a movement and sports science major said.

For Delgado, the sounds of the mariachi band were familiar and exciting.

“I requested a song and I knew all the words,” Delgado said.

For other students who were not used to the loud, lively music, the mariachi band was new and interesting.

“It was very festive, and the musicians were really talented,” Khalin Tucker, a business major said.

The band, Ellas Son, consisted of five women and one man. They played a variety of instruments, including trumpets and maracas, while different band members took turns singing different Mexican songs, each in their own unique style.

“I think this music has the ability to bring a smile to everyone’s face, whether they want to or not, and at least cheer them up a bit,” Haro said.

The traditional Mexican music also did justice to Cesar Chavez Day, as it allowed students to celebrate Mexican influence on American culture.

“I did not even know it was Cesar Chavez Day until I came [to Davenport],” Delgado said.

By celebrating the holiday, La Verne continues to show their diversity on campus.

So, while many students just came to eat dinner and socialize, they could not help but enjoy the exposure to cultural music and food, which was used to celebrate one of the Mexico’s most important civil rights leaders.