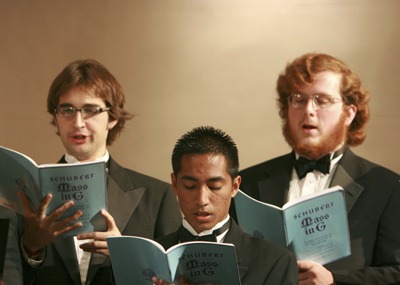 Halfway through the “Mass in G” with the Rio Hondo Chamber Singers, University of La Verne’s Adria Barbosa-Torregosa, Michael Fausto and Kevin Mellis sang Franz Schubert’s works on May 9. The concert was held in La Verne at the Church of the Brethren where both Fausto and Barbosa-Torregosa were soloists of the evening. The La Verne choirs will present “The Pirates of Penzance” this Saturday and Sunday in Founders Auditorium. / photo by Courtney Droke

Rio Hondo chamber singers joined the University of La Verne chorale for a joint choral concert held at the Church of Brethren on Friday at 8 p.m.

The concert started off with ULV chorale singing a composition titled, “Songs of an Unknown Past,” which was composed by Ned Rorem.

The choir sang a total of eight songs which are all considered anonymous due to the fact that there was no credit given to the original works and there is no link to composers. Stephen Gothold, professor of music at ULV, conducted this composition.

“These songs are of an unknown past because they remain anonymous to this day,” Gothold said.

The songs sung by the ULV chorale had titles that spoke of sad times.

Titles such as “My Blood So Red” and “Tears” were sung with great passion and feeling, which moved the audience.

The choir stood before the audience with light shining on them and beautiful high ceilings above them.

The audience was filled with La Verne residents and members of the Church of Brethren, along with several ULV students and faculty, including Reed Gratz, another ULV professor of music.

After the ULV chorale finished, the Rio Hondo chamber singers took the stage and performed before the La Verne audience. Rio Hondo is a community college in Whittier with a vibrant and energetic choir.

“We’ve been studying a little history of rock ‘n’ roll lately, so there are some major influences in these songs,” Brown said.

The majority of the songs performed by the Rio Hondo chamber singers were religious and biblical, but they still got the audience moving by the enthusiasm they put into each song. Not only did the choir sing the songs but they clapped and danced as well.

The second song titled, “Ain’t Got Time to Die,” had a solo sung by Sandra Velarde that was riveting and brought chills to the audience.

Another song performed by the chamber singers was titled “Let All the People Say Amen” and added percussion to the singing. Gabriel Samaniego played a drum along to the beat of the song.

The second half of Rio Hondo’s performance was only the female chamber singers. The men in the choir lined up behind the women and stood quietly while the women sang aloud.

Brown also played the piano while the women sung “Don’t Sit Under the Apple Tree,” a fun, upbeat and playful song that got the whole choir moving and put a smile on the audience’s faces as the choir danced along and clapped.

“For never having sang with Rio Hondo before, I thought it went really well and I liked singing the mass because it is such beautiful music,” Daira Smith, junior and ULV Chorale member, said.

The audience applauded both choirs enthusiastically at the end of each song, and at the end of the final performance gave them a standing ovation.

“It was a marvelous performance,” Elvira Flores, La Verne resident, said. “I would love to see both choirs perform again.”