By Campus Times Editorial Board, Matt Hill on May 9, 2008 in Editorials, Opinions 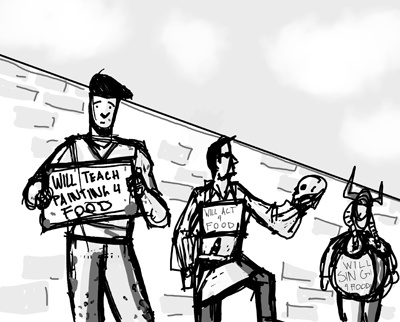 There is no doubt that the average faculty salaries in American colleges and universities differ, especially across fields of study. In recent surveys the huge differences among faculty in various departments have been revealed.

A 2004 study conducted by one professor and two students of Cornell University for its Economics of Education review, “Why Do Field Differentials in Average Faculty Salaries Vary Across Universities?” answers this question based on research collected from 75 universities.

They discovered that many schools find it is easier to have large salary differentials between fields at their university. They said that if faculty members in various fields are housed in different colleges at a university, there is less pressure to equalize salaries across the colleges versus from within the colleges.

The colleges on ULV’s campus relate to this survey because faculty salaries differ greatly by each department on campus.

The Cornell study suggests faculty in some fields such as economics, engineering, law and business have more opportunities for employment outside of academics and this may require a higher minimum level of salary that the University must pay to retain these faculty members.

In relation to these fields of study, faculty who teach in the areas of humanities and fine arts are said to have fewer employment opportunities outside of academia and this greatly affects how their salaries are determined.

Despite these findings, ULV, as well as other universities, has a responsibility to their faculty to compensate them for such things as cost of living.

The American Association of University Professors releases annual reports on faculty salaries, and in their most recent faculty salary survey for 2007-08 some local colleges were ranked in the top 10 Liberal Arts Colleges in Average Salary for Full Time Professors.

These colleges included Claremont McKenna College, Pomona College and Harvey Mudd College whose professors make an average $129,000 a year. The scale was based on 1,386 institutions which cover full-time members to assistant professor positions.

With these colleges so close to La Verne, this shows there is a possibility that the needs of ULV professors can be met. Perhaps investing in an endowment for each department or having the University provide funds that can be allocated in assisting faculty salary increases.

A financial endowment would allow the University to retain a principal balance that could be built on over time and could be used to compensate faculty as the cost of living changes.

Pomona College, which is also a private liberal arts college and is ranked at the top in paying for its full-time faculty, has an endowment of $1.76 billion.

This annual fund is credited to the college’s ability to attract the best students and faculty, and maintain some of the finest facilities in the country.

Each year the college only spends 5 percent of its endowment and collects gifts from alumni, parents and friends of the University every year to add to it.

ULV definitely has the fundraising potential to start an endowment as we have seen with the efforts to build the new Sara and Michael Abraham Campus Center.

If we look to other colleges who have been successful in compensating their faculty through using such efforts as an endowment, our faculty should be able to get the raises they deserve.

Greek gods get too skinny
Letter to the Editor