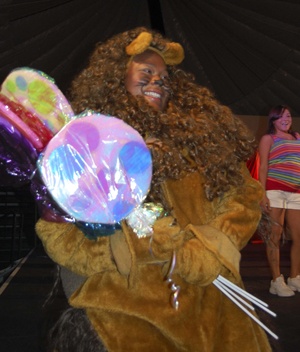 The last day of Greek Week marks a time of joy, relief and one last competition.

This year’s Greek Week, “A Unified Masterpiece,” ended with the annual Lip Sync competition coupled with an awards ceremony on April 27 in the Sports and Science Athletic Pavilion.

“This year, for the second year in a row, we decided to combine that ceremony with our annual Greek Lip Sync competition which serves as our final Greek Week event,” Chip West, assistant dean of student affairs and director of student life said.

The Pavilion was packed with students, faculty and alumni who came out to see the organizations perform and be recognized.

“That’s one of the reasons I joined my sorority, so that I could come back and support them and the Greek community as a whole,” Felirose Tampa­rong, Phi Sigma Sigma alumna, said.

The Greek community displayed their talents through the artful expression of music and dance in lip sync.

First place winners Sigma Kappa delivered a performance based on a circus theme. “Cirque de Sigma K,” featuring everything you might find including a circus lion accompanied by Nelly Fertado’s “Maneater,” a bearded lady coupled with Stevie Wonder’s, “Isn’t She Lovely,” mimes featuring the Black Eyed Peas’ “Shut Up,” Siamese twins and the candy man.

“This was my first year at Lip Sync and I was really impressed with the music and how the organizations connected them with their themes,” said Tracy Bobertz, guest judge and assistant director of housing and residential life.

The women searched for pieces for the game Scrabble while looking through other games such as Candy Land, which featured the songs “Candy” by Aaron Carter and “Candy Girl” by New Edition, Clue accompanied by AFI’s “Miss Murder,” and Battleship which featured The Gap Band’s, “You Dropped the Bomb on Me.”

Throughout their performances the women found different letters for the game Scrabble which in the end spelled “Iota Delta.”

Their performance featured the men visiting different video realms in order to save the princess of “Super Mario” from Sonic the Hedgehog.

Throughout the performance the men referenced such games as “Grand Theft Auto,” “Guitar Hero” and “Pokémon” accompanied with such songs as Michael Jackson’s “Beat it,” N’Sync’s “Bye, Bye, Bye” and Cutting Crew’s, “I Just Died in Your Arms Tonight.”

These winning organizations, along with Alpha Omicron Pi, Phi Delta Theta and Phi Sigma Sigma’s performances, were judged on several categories, which included points for creativity, use of props and enthusiasm.

The evening ended with the announcement of the Lip Sync winners as well as some of the most prestigious awards.

Sigma Kappa was awarded Greek Week and Lip Sync champions, earning a trophy and a spot on the perpetual plaques for each category.

“I’m speechless; the girls worked really hard,” Antoinette Borders, Sigma Kappa president, said. “When everyone thought we were going to fail, we pulled through.”

“I feel honored. It is a great pleasure to receive this award,” Worthy said. “It is something I have strived for my entire Greek life and I want to thank the entire Greek community.”

Ajemian’s family came out to support her organization and were able to witness her receive her award.

“She has worked very hard all of her life in school and I’m proud of everything she has done,” Ajemian’s father Tony Ajemian said.

Greek Organization of the Year, the highest honor of the evening was awarded to Alpha Omicron Pi, which has only been on the ULV campus for one year.

“It’s hard for me to sit back and allow the selection committee to pick the organization of the year, because I get to see first-hand by virtue of my position the hard work, effort and love that goes into what it takes in being excellent in Greek life,” West said.

“I would have to say this year, our selection committee could not have done better.”

Francine Gobert can be reached at fgobert@ulv.edu.