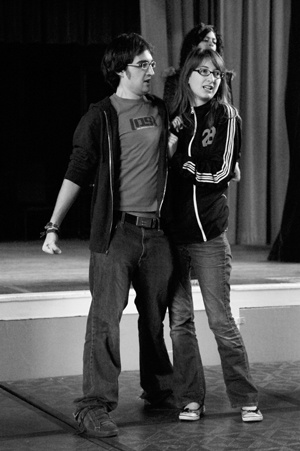 Members of the ULV Choir gather in Founders Auditorium to rehearse their production of “Pirates of Penzance.” Students Adria Barbosa-Torregrosa and Danielle Miller practice their scene together on stage. Musical staging is by graduate student Emily Clark and the direction is by Stephen Gothold. The performance will start Saturday at 4 p.m. and at 8 p.m. on Sunday. / photo by Leah Heagy

In a final flourish before the end of the school year, “The Pirates of Penzance” will sing their way into Founders Auditorium on Saturday and Sunday.

The ULV choir is performing W.S. Gilbert and Arthur Sullivan’s classic comic operetta as a part of the spring semester project and it is sure to be a highlight of their semester.

Although all of the choir members will participate in the production, the principal roles have gone to Kevin Mellis (the Major General), Michael Fausto (Frederic), Sierra Lingan (Mabel), Adria Barbosa-Torregrosa (the Pirate King), Nick Gonzalez (the Sergeant of Police) and Rachel Ortiz (Ruth).

“‘Pirates of Penzance’ is sort of a precursor to the American musical,” Stephen Gothold, musical director, said.

“Gilbert and Sullivan wrote 13 operas together and they are all very fun with good music.”

Gilbert and Sullivan are popularly known for their many comedic operas.

Gothold said that “Pirates of Penzance” is one of Gilbert and Sullivan’s most famous operas, along with a few others, including “The Mikado.”

“They were very famous in the 1880s throughout their career up into the early 1900s,” Gothold said.

While Gilbert and Sullivan worked closely together, the famous duo split their tasks when it came to bringing their operas to life.

Gilbert was in charge of writing the story while Sullivan was the composer.

Fausto is eagerly anticipating the show’s opening this weekend.

“I’m really looking forward to it,” Fausto said. “It’s a lot of difficult and fast music. There are really high notes to hit.”

Because the show is packed with fast and high-pitched music, the choir has to work very hard to make this show a success.

“We rehearse everyday Monday through Friday and we also try to rehearse outside of school,” Fausto said.

“The Pirates of Penzance” is also a good chance for ULV students to take a hands-on approach in the production process.

ULV student Emily Clark, who is working on her master’s degree in education, is in charge of the musical staging for the performance.

Clark, whose duties included creating choreography for the opera, is eager for the upcoming show to premiere.

“It’s been fun,” Clark said. “It’s been fun being able to play with the cast. But it’s also been a lot of work.”

Clark was pleased to have a major role in the production of the opera and added some of her own personal touches to the show.

The production will be the choir’s last performance for the school year.

“The Pirates of Penzance” is sure to be a comedic hit and will be performed in Founders Auditorium on May 17 at 4 p.m. and will return for an additional performance on May 18 at 7:30 p.m.

Admission for the performance is $5 for general admission and $2 for ULV faculty, staff and students.