By Stephanie Arellanes, Victoria Farlow on October 17, 2008 in LV Life 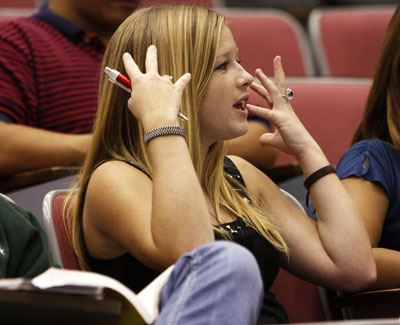 The Green Institute for Village Empowerment, otherwise known as GIVE, is a new club on campus, which first formed in 2007. Biology major Allison Marsh, a member of GIVE, expressed her opinions at the meeting on Oct. 1. GIVE’s initiatives are focused on bringing green technologies to the local area. GIVE members continue to exchange ideas and to have events on campus that will teach others how to save the environment. / photo by Stephanie Arellanes

For the second year, Green Institute for Village Empowerment is educating the University of La Verne and its surrounding community about what can be done to preserve the earth where we live.

Emily Romo, who is the founder of GIVE, said the purpose of the organization is to try to promote sustainability through education and events.

“What we need to do is get information out there,” Romo said. Romo was the club’s first president last year.

She formed GIVE after becoming interested in global awareness and learning about the Green Valley Institute, an organization dedicated to helping sustain the environment and quality of life.

Last spring, GIVE held its first Earth Day event and has returned to campus to help educate club members and the community.

GIVE and GMB both branched from the Society of Physical Life Science and Scholars, which has been at ULV since 1995.

SPLSS is a “support system” for natural science majors, Jerome Garcia, adviser of GIVE, GMB and SPLSS, said.

“GMB and GIVE call to a more general public than SPLSS does,” Garcia said.

Garcia said he wants everyone to become active in taking care of the community.

“No matter what your major is, if you care, get involved,” Garcia said.

Members of SPLSS, GMB and GIVE have lofty goals and are striving to become more recognized on campus.

On Sept. 30, members of GIVE conducted a trash audit outside of Founders Hall that lasted for 20 minutes.

They were shocked by the outcome. The results showed an unawareness of recycling.

The results left Romo with the overwhelming feeling that there is room for great improvement at ULV and beyond.

Romo believes this improvement for the best can be obtained by education.

“We have to get the education out there,” Romo said. “We have to keep talking.”

Junior Courtney Droke agrees with the efforts of GIVE.

“I’ve always recycled. It’s something my parents instilled in me,” Droke said.

“It’s really important, and it’s something that has to be done.”

Amanda McCadden, president of GIVE, believes that the community needs people to be aware, like Droke.

“We need to be more aware of what we can do to help the Earth and our children,” McCadden said.

One important thing McCadden believes we must remember is that “there are consequences to our actions.”

McCadden and Romo both believe that talking with friends is the best way to share information about protecting the Earth.

“We need to come up with fun and interactive ways to educate,” McCadden said.

McCadden, Romo and the GIVE members have done just that. They have held recycling fairs and even visited an electronic waste recycling plant.

In addition to previous events, GIVE encourages its members to suggest field trip ideas that pertain to the environment and the La Verne community.

GIVE will be accepting anything you can recycle, such as plastic bags, old eye glasses, printer cartridges, papers and soda cans.

Those interested in the GIVE organization can get a taste of what they are about at their booth at the Homecoming Fair on Saturday, Oct. 18.

As Homecoming week hits campus, GIVE is preparing for the event with ideas it hopes will grab the attention of students, faculty and alumni visiting the campus.

This year, GIVE’s theme for the homecoming fair is Portland, Ore., since this is the home of the Nike headquarters.

The Nike-Reuse-a-Shoe program recycles old shoes and uses them to make playground materials.

GIVE is always open for new members in sharing their ideas on how to save the environment.

GIVE meetings are every third Wednesday of the month in La Fetra Lecture Hall at 5 p.m.