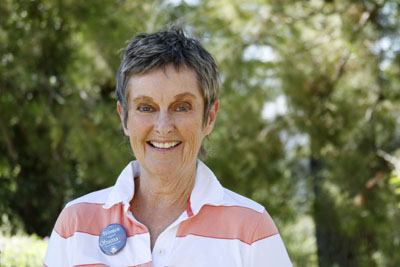 Catherine Henley-Erickson became the city of La Verne’s first poet laureate in April, for a term of one year. There are only 24 poets laureate in California, with three residing in Southern California. Henley-Erickson holds the title of professor of English emerita, having retired from the University of La Verne after 22 years as a creative writing professor. She also writes a movie review column for the Claremont Courier. / photo by Steven Bier

A new addition to La Verne is making art accessible in a new way.

Cathy Henley-Erickson, professor of English emerita at the University of La Verne, is the city’s first poet laureate.

La Verne has an energized focus on art that can be seen around the city in the form of murals and other artwork.

Blickenstaff said the city learned about Henley-Erickson’s poetry and in a group process selected her to be the city’s first poet laureate.

“For any city like La Verne to be concerned enough about writing to create a position of poet laureate means that there is hope for the United States and western civilization,” said Al Clark, associate vice president of academic affairs and professor of humanities.

Henley-Erickson, who received a master of fine arts in poetry from UC Irvine, has always written poetry.

“Whatever natural ability I had was enhanced growing up in a family that loved poetry and being encouraged to write from the time I could hold a pencil,” Henley-Erickson said.

While she worked at ULV, Henley Erickson said she did not have as much time to devote to her poetry.

Now she says there is “less pressure” and more time for her to spend writing her poetry.

This is a position that has been around since the 1600s in England. Henley-Erickson considers her new city role as poet laureate an honor.

Henley-Erickson said poets were at the disposal of the King in England and were present at special events.

“I am totally thrilled,” she said.

Henley-Erickson retired from ULV in 2003 after teaching for more than 20 years.

She started as a part-time instructor, then gained a full-time assistant professor assignment and was promoted to associate professor. She held the distinction of being the director of the ULV writing program.

Henley-Erickson was also in charge of the Diversity Movie Series and Prism, the University’s creative writing journal.

“She inspires many people to both read and love poetry,” Clark said.

Donna Nasmyth, La Verne city council member and assistant professor of education, said a poet laureate is “a great addition to the city.”

“I am thrilled with the decision,” Nasmyth said. “Every time she shows up at an event I am so happy to see her.”

Henley-Erickson has been present at events such as La Verne Day at the Los Angeles County Fair, a Fourth of July celebration and the last La Verne Concert in the Park on Aug. 31.

Henley-Erickson said she is not sure when the next event requiring a poem will be, but she is ready.

“She’s the epitome of the poet laureate,” Blickenstaff said.

Blickenstaff said Henley-Erickson shows initiative and that she is always ready with a poem.

“I enjoy feeling like I’m making a connection with people and making a difference,” Henley-Erickson said. “In the world we’re living in, I think poetry can provide positive energy.”

Susan Acker can be reached at susan.acker@laverne.edu.

Happenings
Movie Review: This ‘Playlist’ is stuck on repeat