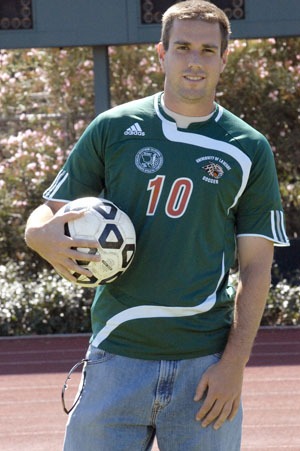 La Verne soccer captain Gilad Hoffman enjoys his final year on the team, as he works toward obtaining his master’s in business administration from the University of La Verne. The South African native moved to San Diego until the age of 9 and has been playing soccer ever since. Hoffman graduated from La Verne in 2007 with a bachelor of science degree in psychology. / photo by Leah Heagy

After four years on the University of La Verne men’s soccer team, captain Gilad Hoffman prepares for his college soccer career to come to a close.

Hoffman, 24, was born and reared in Johannesburg, South Africa, until the age of 9, when he, his father, mother, brother and sister moved to San Diego.

It was there that he discovered his love for sports, especially soccer.

When the time came for Hoffman to attend high school, he kicked the other sports to the curb and decided to focus solely on soccer.

After graduation, he attended UC Santa Cruz, where he was a part of the soccer team but opted to redshirt.

Hoffman was only there a year after deciding to move back to San Diego to attend a local community college.

After a year of community college, Hoffman discovered the University of La Verne and made the decision to become a Leopard.

He immediately took a leadership position on the team and began to form friendships with the other players.

“To be successful on the team, you have to be close off the team,” Hoffman said.

Hoffman, who plays many different field positions, is described by his coach and teammates as the voice of the team.

“He is a great captain,” Joseph Valencia, senior television broadcast major, said. “Everyone listens to what he has to say.”

In 2007, Hoffman graduated from the University of La Verne with a bachelor of science in psychology degree.

He went to work for a year and then decided to return to La Verne for his master’s degree and to take advantage of his remaining year of athletic eligibility.

Hoffman walked back onto the field this year as the men’s soccer captain for his third and final year.

“Gilad is one of the most reliable individuals of his age that I have come across in my lifetime,” Crescencio Gonzalez, ULV head men’s soccer coach, said.

The team currently has a 5-3-3 overall record and is scheduled to play Southern California Intercollegiate Athletic Confer­ence opponent Cal Lutheran on Saturday at home on Ben Hines Field.

“We are lucky to have an individual like Gilad at La Verne,” Gonzalez said.

When this season comes to an end, Hoffman plans to leave La Verne once again and return to San Diego.

Asked what his most memorable moment on the La Verne soccer team was, Hoffman reminisced about a game he played in Chicago.

“We were losing 4-0, and I scored a goal with 11 minutes left and another goal with 11 seconds left to win the game,” Hoffman said. “That was a cool moment that I’ll probably never forget.”

Hoffman, a key leader and captain on the team will be deeply missed but he leaves behind a positive influence and great memories for his teammates and coaches.

“His leadership is invaluable,” Gonzalez said.

Madison Steff can be reached at madison.steff@laverne.edu.