By Rafael Anguiano, Victoria Farlow on October 24, 2008 in News 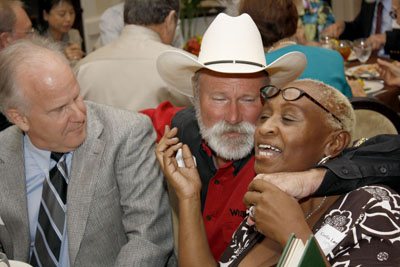 Sharing a rendition of a classic popular song from their years as undergraduates, Tim Morrison, class of 1977 in the center, and Corlis Lewis, class of 1978, enliven the party at a table shared by Robert Earhart, associate vice president of university relations. / photo by Rafael Anguiano

Charles Bentley, spokesman and master of ceremonies, kicked off the 2008 Homecoming weekend for alumni with an excited welcome at the Alumni Dinner/Dance on Oct. 17 at the Sheraton Fairplex.

The night was one of commemoration and remembrance as the Alumni Governing Board welcomed those celebrating their decade reunions, honored five distinguished alumni and paid tribute to the late Roland “Ort” Ortmayer.

The attendees first stood and sang the alma mater.

After dinner was served, old friends reunited over chicken or fish, wine and dessert.

President Stephen Morgan greeted guests and took a look back at the past 40 years.

Morgan, class of 1968, recalled how the University has changed, citing the time when he was at ULV and “only Dick Tracy had a cell phone.”

Morgan attributed ULV’s changes during the decades as being positive steps because of alumni accomplishments and because of a faculty “better than we can afford.”

“The quality of this institution is based on the accomplishments of the graduates,” Morgan said.

Ortmayer, a great contributor to the spirit and traditions of ULV, died Oct. 9.

“Ort lived the La Verne mission in all dimensions,” Morgan said. “He made La Verne a life changing experience.”

Ortmayer’s daughter, Corlan Harrison, offered a tribute to her father.

“He loved all people he met,” Harrison said.

“My father found the home that he was looking for in La Verne,” she said.

“It is easier to talk about Ort than my dad,” Harrison said.

Everyone nodded in agreement when Harrison said that her father’s spirit lives on in the University, “the Ortmayer way.”

Morgan, Donald Pollock, professor of communications, and Paromita Nag, vice president of the Alumni Governing Board, presented the night’s honorees.

He first visited ULV’s campus on Communications Day while in high school and is fondly remembered in his department, said Bentley.

Baca arrived at ULV with little refinement needed. He came “fully formed,” said Bentley. “[Baca] came to ULV as gold. He has the stuff dreams are made of.”

Virginia Garner was honored for her service to the ULV community. Garner received her master’s in education from ULV in 1989.

Garner has spent time volunteering and writing for a cause that means much to her: leukemia and lymphoma.

Susan Ebersole Carter Stutzman, ULV graduate from 1968, now a licensed marriage and family counselor in Claremont, was acknowledged for her service to profession.

“Helping people meet the challenges in life is a challenge itself,” Bentley said.

He said Stutzman is an excellent person who is more than capable of helping others.

Loud cheers filled the banquet room when Eric Bishop, class of 1988, was announced as the alumnus who has given excellent service to his alma mater.

Bishop entered ULV in the fall of 1983 and was immediately seen as a “mover and shaker,” said Bentley.

“Bishop set out to make a difference and always did,” Bentley said.

In 2001, Bishop joined ULV’s administration for a six year stint. He is now director of the Fontana Chaffey College campus.

Harvey Good, a 1960 graduate was honored with the Distinguished Professor award.

Good spent 20 years as chair of the biology department and also did volunteer work for the Mt. Baldy fire department, serving for part of the time as chief.

“[Good] has always been the right person for the job, no matter what the job was,” Bentley said.

In his response, Good, who said he originally was a ULV physical education major until he took a class from Robert Neher and was inspired to change his major, said he wanted to give back after having such a “great faculty while he was a student.”

After the alumni were honored, Radio-TV Operations Manager, Shane Rodrigues led the group of celebrants in a traditional dance of Hokey Pokey.