By Jonathan Smith, Stephanie Arellanes on October 17, 2008 in News 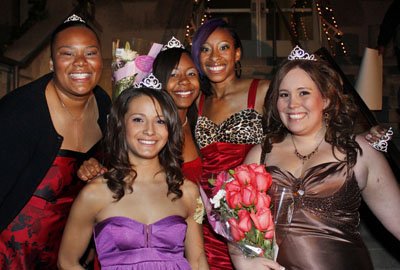 The Homecoming Court for 2008 gathered for the annual Illumination on the front steps of Founders Hall on Monday. Antoinette Borders, a criminology major; Amanda Santos, a movement and sports science major; Toya Johnson-Moore, a criminology major; Dionna Houston, a broadcasting major with a radio concentration; and Ami Smith, a broadcasting major; are in contention for Homecoming Queen. The winner will be announced at halftime of Saturday’s Homecoming football game at Ortmayer Field. / photo by Stephanie Arellanes

Everyone was dressed in their best as close to 100 people gathered in front of Founders Hall for the annual Home­coming Illumination ceremony.

The event took place at 10 p.m. as the 2008 Homecoming Court nominees were announced.

The Hollywood-themed event kicked off the start of Homecoming Week for the Campus Activities Board.

The king and queen of 2008 will be announced tomorrow during the halftime show at the homecoming football game. Shane Rodrigues, radio-TV operations manager, served as illumination emcee. Rodrigues will also emcee the football halftime court presentation.

“It feels pretty nice,” senior Dionna Houston said after being announced as a princess in the court.

“It was really nice,” junior Sami Cacchione said. “It was better than last year.”

Johnson-Moore and Weinreb were the first couple to be announced and walk up the famous stairs of Founders Hall.

“I am just happy to be on court,” Johnson-Moore said. “This was my goal, and I obtained it.”

Johnson-Moore is a criminology major with a minor in psychology. After graduation she plans to work for Boys Republic and eventually do statistics for the FBI.

Weinreb is a psychology major who is involved in several groups and clubs on campus including the Phi Delta Theta Fraternity, Psi Chi, theater, OWLs, Associated Students of the University of La Verne and many others.

The second couple to be introduced was Smith and Gonzalez.

Smith is a radio broadcasting major who enjoys listening to music, spending time with her Phi Sigma Sigma sisters and hanging out with friends.

Gonzalez is a psychology major with a minor in biology and music. His favorite ULV memories were spending time with the A-bottom crew last year and playing the candlestick for Greek Week.

Smith and Gonzalez were followed by Santos and Dominguez.

Santos is a movement and sports science major. She plans to graduate from school with a master’s degree in education and a teaching credential.

Dominguez is a political science major who enjoys playing soccer, hanging out with Phi Delts, eating at Alberto’s and living the life of a La Vernian.

The next couple introduced was Houston and White.

Houston, a radio broadcasting major, is involved in Phi Sigma Sigma Sorority, the African American Student Alliance, and is an on air personality for LeoFM.

White is a public administration major with a minor in music. After graduation, he plans on working for a nonprofit agency or local government in community affairs and public planning. He eventually wants to open his own nonprofit to teach music to little children and then he wants to meet Oprah.

The two posed in front of the stairs before Houston gave White a Hollywood movie kiss on the cheek.

“We really did not know what to do,” Houston said. “We made it up the last minute.”

Some of the nominees, including Houston, are feeling some pressure since the last three Homecoming Queens were members of her sorority, Phi Sigma Sigma.

“For the last three years, a Phi Sig has won,” Houston said. “So they are looking to me and Ami to see if we win.”

Borders and Hernandez were the final couple to be announced.

Borders, a criminology major, is a member of Sigma Kappa Sorority, a Leo’s Den employee, a Greek Coordinator and on the track and field team.

Hernandez is a double major in art design and music instrumental. After graduation he plans to peruse a master’s degree and doctoral degree in architecture/urban planning. From there, he would like to become famous, open an orphanage and start a nonprofit organization to combat global warming.

Before the ceremony, chocolate strawberries and apple cider were served.

Many, especially some juniors, cannot wait until the next Illuminations ceremony in 2009.

“I hope to be on the Homecoming Court next year,” Cacchione said. “It would be fabulous.”