By Leah Heagy, Richard Lugo on October 24, 2008 in Football, Sports 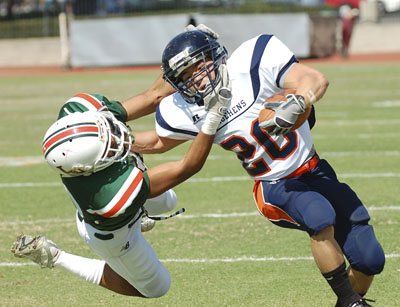 La Verne senior defensive back Grant Woods brings down Pomona-Pitzer running back Russell Oka early in the first quarter. The Leopards triumphed Saturday in their Homecoming game against the Sagehens, 45-37. / photo by Leah Heagy

There was a delightful sense of relief in the crowd last Saturday as the Leopards capped off Homecoming weekend with their first win of the season against the visiting Pomona-Pitzer Sagehens, 45-37.

Pomona-Pitzer drops to 0-2 in conference and 1-4 overall.

The Leopards played better than they have all season, scoring 11 more points in this game than they had combined in their first four games.

The difference between this game and any other that the Leopards have played this season was that they appeared to play as though they expected to win.

La Verne’s play calling was more aggressive, its hits were harder, and its execution on both sides of the ball is what earned the team its first SCIAC win.

Both teams started the game out strong, with each offense scoring on their first drive.

The Sagehens led 10-7 at the end of the first quarter.

With 13 seconds remaining in the second quarter, La Verne’s junior quarterback Anthony Andre threw a 19-yard pass that was intended for sophomore tight end David Bradley but deflected by a Sagehen defender and caught for a touchdown by senior wide receiver Charles Lacy.

Lacy finished the game with seven receptions, 65 yards and a touchdown.

Coming out of halftime, the Leopards wasted no time, taking advantage of a muffed fair catch and recovering the fumble on the Sagehens’ 12-yard line.

Pomona-Pitzer responded with another rushing touchdown later in the quarter after a 17-play, 93-yard drive that took more than seven minutes off the clock and brought them within one.

This was as close as the Sagehens would get as Andre threw a perfect 41-yard touchdown pass to junior wide receiver Kenneth Chapman to extend La Verne’s lead 31-23.

Chapman’s touchdown grab ignited the crowd and his teammates, and, for the first time all season, gave the fans at Ortmayer Stadium the feeling that victory was imminent.

Andre would add another touchdown pass in the fourth quarter to senior wide receiver Phi Van Le to put the Leopards up 38-23.

The teams would trade touchdowns late in the fourth quarter, but it was not enough for the Sagehens as ULV earned its first victory on the season.

Pomona-Pitzer quarterback Jacob Caron was 30 for 49 and threw for 374 yards in the air and three touchdowns.

The Sagehens were also led on offense by wide receiver Robert Maki who caught 16 passes for 227 yards and a touchdown.

Former coach Roland “Ort” Ortmayer, who died Oct. 9, was honored at halftime as about 300 friends, former students and players joined hands and formed a large shaped “O” on the field. The “O” stretched from sideline to sideline and extended 80 yards down the field.

After a brief mention of all of Ortmayer’s contributions to La Verne by longtime ULV football public address announcer Pete Baum, the crowd stood in silence for three minutes in memory of the former coach.

Upon the Leopards’ return from halftime, they ran onto the field through two cheering lines now formed with alumni and friends who knew Ort. In passing through the human tunnel, the team was symbolically bestowed with Ort’s spirit from those who were graced by knowing the former ULV coach.

The Leopards play their last home game of the season tomorrow at 1 p.m. against Occidental.