By Campus Times Editorial Board, Michael Escañuelas on October 17, 2008 in Editorials, Opinions 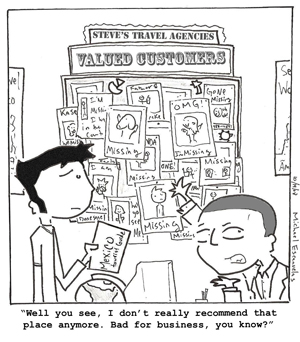 You may have spent your last trip to Mexico via a Carnival cruise ship or driving across the border to Tijuana.

Your day might have been spent walking Revolution Boulevard in TJ or just cruising in El Centro Ensenada to Hussein’s. Then you might have loaded up on pharmaceuticals, filled your car with inexpensive gasoline and bartered for silver trinkets to take back to family and friends. You might have spent the rest of the day playing with 8-year-olds in the streets, paying them for “watching” your car, then dodging the cartons of chicklets and friendship bracelets hawked your way. Your trip was unique, friendly and mildly foreign.

Just when you thought you escaped the bracelet cartel, across the street is another cartel. The drug cartel. Tijuana has suffered a rising wave of homicides. Officials blame warring cells of the Arellano-Felix drug gang. The killings in the border towns are skyrocketing because of the Mexican government’s fight against these drug cartels. And the cartels have turned against each other.

The vast majority of those killed have been cartel members, drug users, dealers or policemen. Another explanation is that the cartels have begun paying their mules with their product. The recipients become dealers in their hometowns, making heroine, cocaine and marijuana more available than ever. A thriving drug trade and increase in criminal gangs has made Mexico one of the top 10 most dangerous places in the world.

The official word is that if you are not involved in drugs, Mexico is no more dangerous than traveling anywhere else in the world. Yet, even Mexico City is entering a blurry time, and the streets of mafia drug cartel violence is increasing. The quieting words from the Mexican government that tourists are safe in border towns brings no solace. It is coupled with the silence from the U.S. consulate regarding travelers’ safety.

How can one ignore the images found in the Los Angeles Times that “mangled bodies turn up in garbage-strewn lots, a dozen at a time. Killers cut out their tongues, slice off heads and leave behind taunting messages. Two barrels of industrial acid left on a sidewalk last week are believed to contain liquefied human remains.”

The fun weekend in TJ is not so much fun anymore. At least 400 people have been killed this year in Tijuana, most of them victims of organized crime, according to Baja California Atty. Gen. Rommel Moreno Manjarrez.

The streets of Tijuana are empty; merchants have lost their livelihood. The border town economy, so depend on tourist money, is going bust.

True, there has always been risk associated with going to Mexico. Americans have long associated it as a place where they can do acts that are illegal in America, whether it is underage drinking or off road racing. No one would ever label the place as being “safe.” There always was the risk for a traveler experiencing harassment by police, carjacking encounters, robbery—you name it. What separates Mexico from the United States in these cases is that by and large the United States has a trustworthy police force.

If one finds trouble in Mexico, he/she has to think long and hard about calling the police.

Tijuana Mayor Jorge Ramos Hernandez says part of the problem is that members of the local police have been working for years to help the cartels smuggle drugs into the United States.

Ramos says he’s cleaning out Tijuana’s police force and working with the Mexican federal government to help his city combat the drug cartels. But it is a tough job when you cannot trust your own police department.

In the background of this cartel horror show are the illegal immigrants dying in record numbers as they try to cross the Sonoran Desert, from Mexico into the United States, because urban entries in places like San Diego and El Paso have been nearly sealed by fences, technology and agents.

Mexico is a tough place these days. Many of its citizens are wondering what is going to happen next.

The image of Mexico as the United States playground is rapidly changing. Mexico is in serious turmoil.