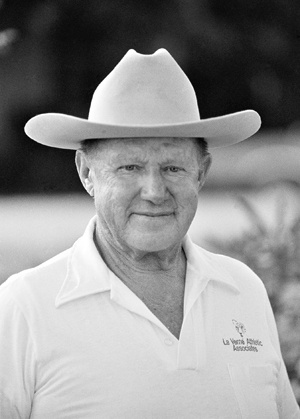 On the day of the naming of the football stadium in his honor, Ort donned a signature river hat. / file photo by Kevin Bowman

Born on Aug. 22, 1917, in College Park, Md., Roland “Ort” Ortmayer was destined for greatness. Yes, greatness is a broad word that can mean many things, but that is what Ort was to the many people he influenced in his life.

The Ortmayer family moved to Montana May 12, 1918. Much of his formative youth was spent growing up in Roundup, Mont. Later in life, Ort would regal campfire audiences with his “Greener stories”—Tom Sawyer-like tales of him and his best friend engaged in adventurous escapades.

Ort went to Helena, Montana to study at InterMountain Union College, which was destroyed by an earthquake in the fall of 1935, while he was still a student.

Due to an injury he suffered playing basketball that year, Ortmayer took a year off school and started a job through the county agent working as a map drawer.

The next year, he went to Northwestern University on an athletic scholarship, participating in football, basketball and track and field. Ortmayer, who played running back, was small for his size, weighing only 147 pounds.

In his second season at Northwestern, Ortmayer was projected by Arch Ward, a writer for the Chicago Tribune (the primary sports writer in the Midwest at the time, and the inventor of the Major League Baseball All-Star Game), as one of three players to be “the next hero of the Big 10.” 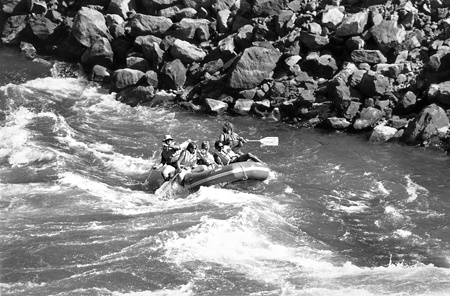 Like saddling up a wild Montana bronco, Roland Ortmayer, joined by daughter Susan, captains his raft through the Yankee Jim Canyon class three rapids on the Yellowstone River. The raft carries family members, including wife Cornelia. Coach Ortmayer would return most summers to Montana. He owned a cabin near the Bridger Bowl ski area but rarely stayed in it, preferring to travel widely throughout the state, floating its scenic rivers with his La Verne students and alumni friends and camping alongside them in his large trailer, followed by in the early 1990s, his motorhome. / file photo courtesy of University Archives

After graduating from Northwestern, Ortmayer found his calling as a high school teacher in Kingsport, Tenn., teaching biological sciences. While there, he also became a registered contentious objector in the first peacetime draft in 1940. Ortmayer proved his resolve by standing up for what he believed in, which was that “war was not something that could contribute very well to the world’s betterment.”

When Ortmayer left Tennessee, he took with him not just his first experience of teaching, but his future wife, Cornelia Burgan.

When telling this story of how he met Corni, one could see the delight in Ortmayer’s face as he could recall the day they met (Oct. 12, a Sunday afternoon), where they were (in the kitchen of his quarterback parents’ house), who was there (the quarterback, the fullback, the quarterback’s mom and dad), the dress she was wearing (a green velveteen dress) and the style of her hair (up). As Ortmayer said it best, “I was a goner right then.” The couple was married Aug. 22, 1943, and, according to Ortmayer, “never had an argument.” 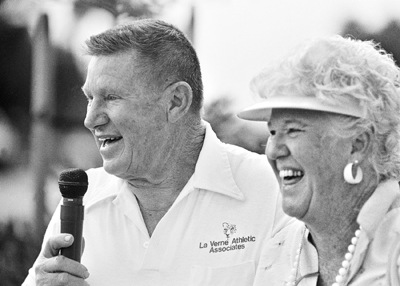 Ortmayer and his wife Corni speak at the dedication of Ortmayer Stadium in 1991. The field refreshment stand Corni’s Corner is named in her honor. / file photo by Kevin Bowman

Ortmayer dedicated the next four years of his life as a contentious objector. The first year he spent working as a firefighter in Oregon. The next two years, Ortmayer worked as a director at an institution for mentally deficient people in Buckley, Wash.

Next Ortmayer and his wife traveled to Rochester, N.Y., to be a part of a year long physiology experiment “to study the relative value of protein food,” along with 17 other men. He said that during that time he was a medical guinea pig.

In 1947, Ortmayer went to William-Penn College in Iowa to be the director of athletics, football coach, basketball coach, baseball coach, track coach and teacher of three physical education courses. While there, Corni gave birth to son David. David later lost his life in a Puddingstone Lake drowning accident in 1953. The couple subsequently had two daughters, Mary Susan and Corlan.

In the spring of 1948, La Verne College sent Ortmayer a letter asking him to come to La Verne and coach. Having traveled across the country with Corni, Ort acknowledged that Southern California was the logical choice, since he had experienced life in three corners of the United States plus the center.

“We were going to stay two or three years,” Ortmayer said.

During his tenure at La Verne, Ortmayer coached football for 43 years, track and field for 33 years, basketball for 18 years and baseball for 12 years. In addition to this, he also taught 10 physical education classes a year, including archery, climbing, throwing and small watercraft. In addition, he was known for his popular Values and Perspectives of P.E. class. 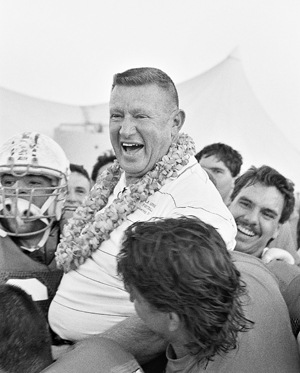 Ortmayer celebrates with his players after coaching his last game, a 37-7 win over Claremont on Nov. 10, 1990. / file photo by Eric Borer

“For me, Ort was La Verne,” Rex Huigens, La Verne alumnus and former head football coach, said. “I wanted to attend La Verne College because I wanted to be part of an Ortmayer program. I received much more than I ever anticipated.”

Like Huigens, the University received much more that it anticipated from Ortmayer, who took pride in painting the lines on the field, hand scrubbing the jerseys and cleaning the locker room himself. Corni assisted Ort every step of the way by sewing up torn jerseys in addition to selling food and drinks at home games.

He had a motto, which he repeated often to students, “Everything in life must be fun. If it isn’t fun, make it so, or just quit doing it.”

“College people are the most exciting people in the world,” Ortmayer said. “I sometimes can’t believe they paid me money to work at La Verne.”

His guidance and leadership extended beyond La Verne and beyond organized sports. The Ortmayers had run a summer boys’ camp “Montana Trails for Boys” for 13 years that featured fly fishing, hiking, rafting and canoeing, but in spring 1954, following the death of his son, the Ortmayers started what would become a tradition at the University, taking a group of students on a spring hiking trip to Zion National Park. “Corni and I were feeling a great deal of pain come spring. We asked ourselves, ‘Why are we staying here where that pain took place?’”

At that moment was born the all-invited La Verne spring trips. They had a keen student following from the start. Ortmayer would boast that his students, working in teams and using their knowledge of climbing, ascended the Kohab Arch in the Zion back country, which was known as an extremely difficult climb. “The score was La Verne 123, the world six,” Ort would boast, telling how only six outside his group had ever ascended the arch. 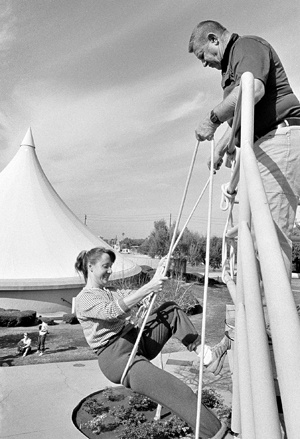 One of Ortmayer’s popular classes was Climbing, where students such as Wendy Stevens rappelled down Miller Hall. A class highlight was a zip line set up from the top of the Mainiero Building to the middle of the football field. / file photo by Elaine Zukle

During the first trips, Ortmayer encouraged his students to make their own rafts of plywood and inner tubes. Later, the homemade craft gave way to conventional rafts. The water they took on was some of the most challenging in the West: the Salt River, the Verde River, the Kern River. Ort also led two spring excursions to Todos Santos, Mexico, launching kayaks, from Ensenada.“We never damaged a person,” Ort said of his injury free record.

In the mid 1970s, Roland and Corni began to offer the month-long ULV summer class, “When Lewis and Clark Met the Mountains,” which explored the same pathways taken by 19th century explorers Meriwether Lewis and William Clark.

The Montana float trip opportunity was extended to ULV’s alumni in 1980. It continues to this day, now led by Ortmayer’s former white water guides. In summer 2008, about 80 people made the trip for at least a portion of the two-week adventure.

Ortmayer was recognized in a 1989 Sports Illustrated feature article on his unique coaching style and the influence he had on the University of La Verne. Ort later claimed that he kept this article by his bed “because it made him feel special,” and said he would look at it from time-to-time.

Ortmayer loved people and showed a vested interest in their development both on the field and in the classroom.

“Ort was truly a catalyst who brought out the very best in people,” University of La Verne Stephen Morgan said.

“Ort thought sports should be an experience,” said Jim Milhaun who played running back for La Verne and graduated in 1957. Milhaun, who later became football coach for Azusa Pacific University in 1977 and regularly coached against Ort added, “I’ve coached football for 45 years, and I don’t know if I’ve ever met anyone who knew more about football. He made the game pure joy.” 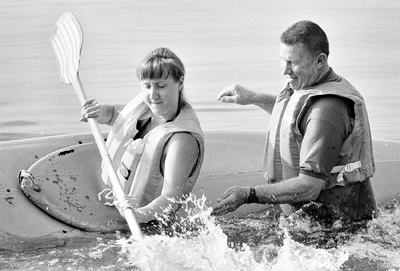 Julie Kline, woman’s basketball coach and interim director of athletics, said, “The La Verne athletics department has lost a great friend and a legendary leader. Ort laid the foundation for success in our department during his more than 40-year tenure here.”

Jim Paschal, a La Verne faculty member, former women’s volleyball coach and athletic director, said, “Ort’s philosophy on athletics was the purest and most idealistic of anyone that I’ve ever run into. He always had the students’ best interests as a top priority. He would always make time for students because he believed they should be the focus.”

Writer’s Note: Listening to Coach Ortmayer tell his stories makes one feel like he has missed out. Hearing his contagious and heavy hearted laugh could put a smile on anyone’s face. Coach Ortmayer will be dearly missed for the love he gave to everyone he met. His impact on the La Verne community is bigger than any building, field or stadium. Ortmayer’s legacy resides in the hearts of those who had the pleasure of knowing him and in memories he leaves with us. It is up to us to carry his philosophy forward. That would be the highest tribute to Ortmayer’s memory.