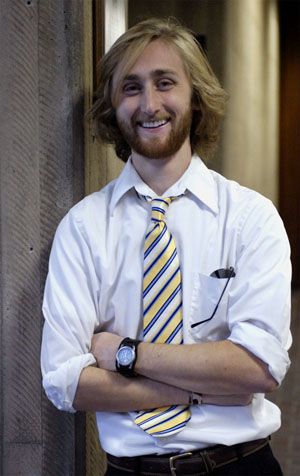 Political science major Jack Cunningham is among nine candidates running for two posts on Ontario’s City Council. If elected, the 22-year-old University of La Verne senior would serve a four-year term for the city of Ontario. Many in the community are supporting his run for office. / photo by Leah Heagy

“I have always heard the old axiom that if you want something done right then you should shoulder the responsibilities yourself,” Cunningham said.

Cunningham found a strong interest in government class in high school and continued studying the subject in college.

Studying politics at these schools has generated a deeper understanding of the responsibility he has toward the hometown he said has given him so much throughout his life.

Cunningham can be seen in his campaign pictures wearing a crisp black suit and blue tie looking sharp as can be.

However, just because he is running for councilman does not mean he is going to change who he is and change his look.

So from toe to neck he looks the part.

Yet his flowing blonde locks set him apart from the typical man-in-the-suit politician.

His shiny, long blonde hair and full-grown beard make him quite the opposite when compared to his competition.

These pictures have been posted on his campaign Facebook and MySpace pages, both being used to help promote him as a candidate.

A glance at these pages will help voters gain an idea of who the real Cunningham is.

Friends and family have also been helping Cunningham campaign, mainly by word of mouth.

“My family and friends have all been very supportive, from $10 and $15 donations to driving all around town helping me put up signs,” Cunningham said. “But most of all, they have helped by telling people they know that I am running and letting them know what I hope to do and why I am seeking this position.”

A big factor that could determine why voters will or will not vote for Cunningham is his young age.

“The reality is that people will look at me as inexperienced and not serious about the position due to my age and therefore make it less likely that they will actually commit to voting for or supporting my candidacy,” Cunningham said.

“This is my biggest challenge; proving to people that what I seek is to honestly and sincerely represent the needs and ideas and wishes of the residents of my city.”

Cunningham has been going door-to-door around Ontario talking to people and getting them to understand that there is a new option for them to vote for city council, and that it is not the same old faces they see every year.

“Age should never be a factor in politics,” Ian Lising, assistant professor of speech and debate, said. “Just ask John McCain how he feels on this.”

There are “Jack Cunningham for Ontario City Councilman” signs that are displayed in the hallways of Founders Hall, and signs that supporters are putting in windows and on their lawns.

“Jack should take advantage of people considering new faces in the current presidential election,” Gitty Amini, associate professor of political science, said. “Jack is charismatic and is good at reaching people. He is also a flexible guy and genuinely cares about finding new solutions.”

Cunningham says he wants to change the negative perception of politics people have.

“I have always seen politics as something hopeful, something that is meant to help people and be a vehicle of change,” Cunningham said. “Politics has such great potential to help, and such a capacity to be something that people look to with hope and optimism rather than becoming increasingly cynical and ambivalent toward this entity of politics.”

He hopes to show the people of Ontario that there is someone who wants to represent their ideas and not simply seek to maintain their own power.

“I think it is extraordinary that Mr. Cunningham is taking not just an interest in his political system, but actually taking a part in it,” Lising said.

On voting day, Nov. 4, Cunningham hopes that people will make the decision to vote for a new face for Ontario and give change a chance.

“I have an obligation to repay this city for everything it has given me, and to do whatever I can to make the improvements this city needs and deserves,” Cunningham said. “Ontario needs new ideas and new perspectives, and I believe that I can be the voice for a new Ontario.”