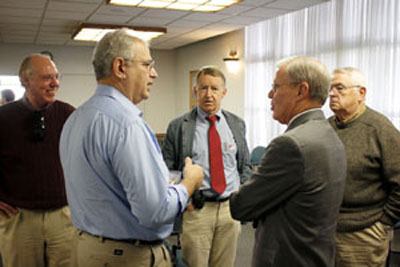 Mirroring the U.S. stock market, faculty and students were left in either apprehension or confusion after hearing Adham Chehab, professor of business administration, discuss the negative effects of seasoned equity offerings, Nov. 3, in the President’s Dining Room.

The title of his lecture initially was “Operating Performance of Companies Surrounding Seasoned Stock Issues,” but Chehab modified it to “How the Market Reacts to Seasoned Equity Offerings.”

“Sorry, I know this was false advertising,” Chehab said. “But we do that in business anyway.”

Laughter filled the room as Chehab fired up his Powerpoint presentation.

However, the laughter soon turned into silence as he began explaining the difference between an initial public offering and a seasoned equity offering.

An IPO is when a company, usually a new one, issues a common stock to the public for the very first time.

An SEO is when a more-developed company offers an additional stock after its IPO to gain additional funds to pay for expansion.

“A good company doesn’t store monetary profits in a safe,” Chehab said. “A good company will invest their profits in resources. But in order to make any expansions, a company must turn to external sources for funds.”

The best way for a company to expand is to borrow money rather than sell stocks.

The problem is that many companies have instead turned to SEOs as their source for additional funds.

The core of Chehab’s extensive research stems from the theory of Stewart C. Meyers and Nicholas S. Majluf, two scholars who conducted empirical tests on borrowing money and selling stocks. Their theory is largely based on the notion that it is better to borrow money than to sell stocks when a business wants to expand.

Meyers and Majluf’s findings were published in the “Journal of Financial Economics” in 1984.

Not every company follows their theory.

“The majority of companies have experienced negative SEOs,” Chehab said.

He said he derived his conclusion from multiple financial databases that give financial information of companies across the nation.

Compustat, Smart Data Compression (SDC) and Center for Research in Security Prices (CRSP) are databases that are continuously updated and require a yearly subscription which costs thousands of dollars.

Chehab continued his presentation with complex charts and graphs that contained statistical information.

Students remained silent while multiple professors questioned the statistical findings. Some were skeptical while others were outright confused.

“It was difficult for me to grasp what all the statistics and findings represented,” Ashley Contreras, junior art major, said.

“Unless you understand all the figures being presented, you won’t fully understand the conclusion,” Bill Cook, professor of English, said.

Chehab presented complex variables and mathematical equations that represented how he arrived at his financial conclusions.

He plans to disseminate his findings into an academic journal such as “Financial Management” or “The Financial Review” March 2009.

“Faculty lectures are dedicated to presenting new ideas and findings,” Chehab said. “You are supposed to present your ideas, get feedback and polish it.”

Chehab, who holds a Ph.D. in financial economics, has worked as a financial analyst, field engineer and computer programmer.